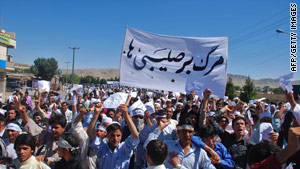 Demonstrators in Herat, Afghanistan, protest two Christian groups they accuse of proselytizing, which is illegal there.
STORY HIGHLIGHTS
RELATED TOPICS

Washington (CNN) -- A firm affiliated with the former Blackwater security company has been awarded a contract to provide protection to U.S. consulates and diplomats in the Afghan cities of Herat and Mazar-e Sharif, a U.S. State Department official confirmed on Saturday.

The official said U.S. Training Center got the contract on Friday. It is part of Xe, the new name of Blackwater Worldwide.

Blackwater became the target of widespread outrage in Iraq after its contractors were involved in the September 2007 shooting at Baghdad's Nisoor Square that left 17 civilians dead and 24 wounded, straining relations between Iraq and the United States.

The deal is a one-year contract with an option to extend up to 18 months. If the contract is fulfilled for that entire period, it would be more than $120 million.

The State Department official, insisting on anonymity, said past history with Blackwater did not prevent U.S. Training Center from bidding on contracts and that in this case the company was the best qualified for the work in Afghanistan.

U.S. Rep. Jan Schakowsky, D-Illinois, said on Saturday she was "extremely disappointed" over the deal and that the former Blackwater shouldn't be receiving more U.S. contracts.

"This is a company whose cowboy-like behavior has not only resulted in civilian deaths; it has also jeopardized our mission and the safety of U.S. troops and diplomatic personnel worldwide. Instead of punishing Blackwater for its extensive history of serious abuses the State Department is rewarding the company with up to $120 million in taxpayer funds," she said in a statement.

The congresswoman has introduced legislation that would phase out the use of private security contractors.

"Though the name Blackwater has become synonymous with the worst of contractor abuses, the bigger problem is our dangerous reliance on such companies for the business of waging war."

As for the Nisoor Square violence, the U.S. Justice Department is pushing forward efforts to put five Blackwater guards on trial in connection with that incident.