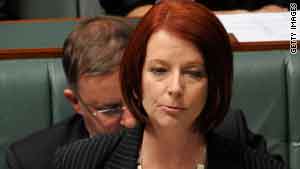 Gillard announced the plan, which scraps the name "super-profits" that had been used by her predecessor, in Canberra, with Resources Minister Martin Ferguson and Deputy Prime Minister Wayne Swan at her side.

Friday's announcement is a step back from what her predecessor, Kevin Rudd, had sought -- a 40 percent tax on profits across the mining industry.

As an election deadline loomed, Rudd couldn't get the mining companies on board, was viewed by many as inflexible and saw his popularity plummet.

Last week, Rudd -- despite having steered the country through the world economic downturn while avoiding recession -- lost his party's support and was replaced by Gillard.

Her rapid resolution of the problem puts her in a strong position to emerge victorious once she calls a snap election, as she must do before the end of the year. Since taking over last week, she has established a sizable lead in public approval polls over conservative opposition leader Tony Abbott.

Gillard's proposed plan focuses on the nation's biggest and most profitable commodities: iron ore, coal, oil and natural gas. Together, they represent three-quarters of the nation's exports.

That focus reduces the number of companies the tax applies to -- from 2,500 to about 320, according to the government.

Iron ore and coal will be subject to a new, profits-based Mineral Resource Rent Tax (MRRT) at a rate of 30 percent, she said.

"Australians are entitled to a fairer share of the mineral wealth in our ground," she said.

In the fine detail of the agreement, though, the mining companies would benefit:

-- Projects will be entitled to a 25 percent extraction allowance that reduces taxable profits subject to the MRRT, she said.

-- Mining companies will be able to depreciate any investment made after July 1, 2012, immediately instead of having to depreciate it over years.

But the accord also spells out that the Petroleum Rent Tax, which currently applies to offshore oil, will be extended to cover onshore oil and gas projects as well, at 40 percent, Gillard said.

The company tax rate will be cut to 29 percent by 2013-2014, but will not be reduced further under current fiscal conditions, said Swan.

He predicted the agreement "is going to be very good for new investment."

"Under these revised arrangements, we remain on course to return to surplus in 2013," Gillard said. "It will end uncertainty and division ... it will allow us to move forward as a nation."

The deal, signed Thursday night, still needs parliamentary approval. A policy transition group will be established to consult with industry and advise the government on how to implement the agreement, she said.

Though it will translate into a $1.5 billion shortfall in revenue from the $12 billion that had been envisioned under what Rudd called the "super-profits" tax, the government leaders appeared pleased.

"We have created certainty and maintained an attractive investment horizon, which will guarantee we'll continue to bring forth those economic investments that will create wealth and a bigger economic cake for Australia," said Ferguson, who also serves as minister of tourism.

Industry also appeared pleased. In a posting on its website, the international mining group Rio Tinto said it has "consistently maintained that any tax reform proposal should not be applied retrospectively and must retain Australia's international competitiveness as an investment destination."

"We all want a minerals taxation system that grows the mining industry in Australia," Peever said. "A strong mining sector keeps the Australian economy strong, spreading prosperity to all Australians."

BHP Billiton Chief Executive Officer Marius Kloppers said the company was encouraged by the decision to replace the proposed "super-profits" tax with the MRRT on mined iron ore and coal.

"We are encouraged that the MRRT design is closer to our frequently stated principles of sound tax reform, in that the proposed tax will be prospective in its treatment of profits from our iron ore and coal businesses, and not apply to the other commodities in our portfolio."

The Australian dollar, up against the U.S. dollar in early Friday trading, ended the day down slightly against the greenback.

After being up throughout much of the day's trading, Australia's ASX 200 stock index gave back most of its gains late to close up just 0.03 percent.

And shares in Australia's two biggest mining companies finished Friday trading mixed -- BHP Billiton down 0.1 percent and Rio Tinto up 0.3 percent -- after each was up more than 1 percent earlier in the day.