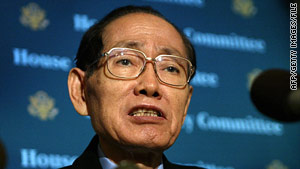 The two men, known only as Kim, 36, and Tong, 34, were arrested in April for conspiring to kill Hwang Jang-yop, 88, a senior politician who defected to South Korea in 1997, the Yonhap news agency reported. Hwang was a high-ranking member of North Korea's ruling Workers' Party and had received repeated death threats for speaking out against his former boss.

Posing as defectors, they arrived in Seoul last December under orders from a North Korean espionage unit, Yonhap said. The Seoul Central District Court found the statements of the spies about their motives, infiltration routes and planned crimes convincing enough to convict them on violating South Korea's national security law.

Kim and Tong had pleaded guilty to the charges at their trial, Yonhap said.

Prosecutors had demanded 15-year sentences but the court said it mitigated their jail terms because the assassination attempts were not actually carried out and they cooperated in the investigation.