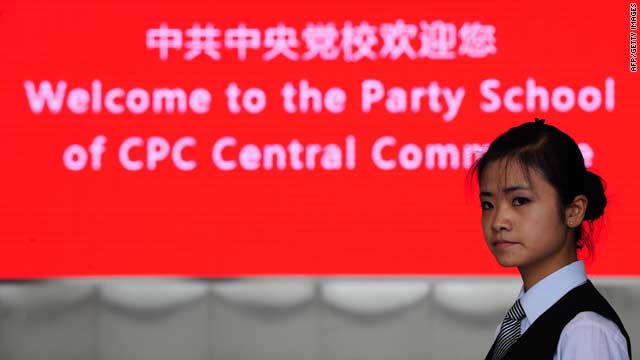 A hostess awaits the arrival of visiting journalists at the Central Party School of the Communist Party in Beijing on Wednesday.
STORY HIGHLIGHTS

Beijing, China (CNN) -- The Communist Party of China turned 89 on July 1 with self-congratulations. Speaking at a gathering celebrating the founding of the CPC, Chinese president and Communist party chief Hu Jintao said, "Practice in the past 89 years proved that the CPC has met the expectations of the people." The party, which now boasts of over 78 million members, remains the sole ruling party in the People's Republic, governing the lives of 1.3 billion people.

The CPC still dispenses favors and patronage through a centralized system of ranks, privileges and controls akin to the 2,000 year-old practices of Chinese imperial bureaucracy. It still professes loyalty to "Marxism-Leninism-Mao Tsetung Thought" and to the teachings of the late leader Deng Xiaoping. But the Party has had to adapt to rapidly changing times.

"It is not the omnipresent party of the past, but its 'invisible hand' remains strong in the economy, media, polity and society," said David Shambaugh, author of the book "China's Communist Party: Atrophy & Adaptation."

But can the CPC survive the dramatic changes buffeting China?

Shambaugh, a political science professor at George Washington University, said the CPC has been "remarkably adaptive and resilient" over the past 20 years.

"I do not see it as politically endangered, but it does have certain key weaknesses, foremost among them the resentment by ethnic minorities and widespread corruption," he said. "The Party's main strategy has been one of co-optation, to try and co-opt various social groups. If this does not work, then they employ more coercive measures."

Gordon Chang, author of "The Coming Collapse of China," sees grim prospects. "The Party is adapting as best it can to extremely trying circumstances," he said. "Yet the signs of social disintegration since January -- school attacks, wildcat strikes, murders of judges -- are leading indicators of political turmoil."

The Party is adapting as best it can to extremely trying circumstances
--Gordon Chang, author of "The Coming Collapse of China"
RELATED TOPICS

The party's legitimacy remains brittle, he said. "The Party's legitimacy rests on the perception that it navigated the global downturn well and that it is responsible for the nation's spectacular rise. When the economy fails soon -- its stimulus program is unsustainable, and its economic model is ill-suited for global conditions -- it will have to rely on coercion alone."

Meantime, the Party is trying to refurbish its image, even adapting steps that seem to go against the grain of communist tradition. Take "toumingdu," the Chinese term for transparency.

"The Party seems to have concluded that transparency and openness are helpful devices to improve its legitimacy and ruling ability," says Shambaugh.

Some CPC institutions say they will seek to become more media-friendly. On June 30, 11 spokespersons from various CPC departments held in Beijing a joint press conference that the Chinese media described as an "unprecedented display of enhanced transparency in Party affairs." They each gave their phone numbers and resumes, introduced the basic responsibilities and policies of their responsibilities and answered questions from the Chinese and overseas journalists.

"How many of the nearly 80 million party members are in the party for genuine ideological beliefs instead of purely personal and pragmatic reasons?" I asked Deng Shengyuan, spokesman of the CPC's Organization Department, a powerful body in charge of recruiting members and appointing party officials.

"Over 99 percent of our party members are ordinary working people on the frontline," Deng replied. "They support the party's theories and goals." He acknowledged matter-of-factly that some members have "impure motivations when they joined." The CPC, he added, will "clean up and expel the misfits."

Many party officials have been implicated in sensational economic crimes, fueling popular discontent over the growing gap between the rich and poor and alienating the party officials from the ordinary people. For years, Beijing has pushed anti-corruption campaigns, only with modest success.

At the Wednesday press conference, the spokesman of the central discipline inspection commission, a party watchdog, revealed that the past ten months, more than 5,800 officials have been penalized for suspected corruption related to big construction projects. "Some 3,400 of them have been turned over to the courts," says spokesman Song Yuliang, for possible criminal prosecution.

To show that the Party is becoming more open, China this week opened the gates of its Central Party School to a group of reporters. "The Party School and the whole Communist Party system have not had much interaction with the outside world," Chen Baosheng, vice president of the school told us. "We are trying to change this. Our party has nothing to hide."

Over the past 80 years, the school has served as a training ground for China's middle and senior-level party and government officials. It has also evolved as a think tank which churns out research papers sometimes commissioned by Beijing's top leaders. Until recently, it was inaccessible to visitors.

For four hours, we were given a carefully choreographed tour of the sprawling campus. We were allowed to listen in on a lively lecture on how top-down management systems don't often work. We were able to talk with handpicked teachers and students and shown around the school's cafeteria, amphitheaters and hotel-style dormitory.

We saw mostly middle-aged students from different provinces and backgrounds mingling casually during breaks, while others played basketball, badminton and tennis.

In the schools' main cafeteria, cooks prepared two sets of free meals everyday. For students who hold the ranks of sections chiefs and above, we are told, their meal budget is set at 55 yuan (about US$8) per person. But those who are vice-ministers or higher, it is 70 yuan ($10.30) per head. It seems absolute equality is still an elusive goal, even in this bastion of communism.