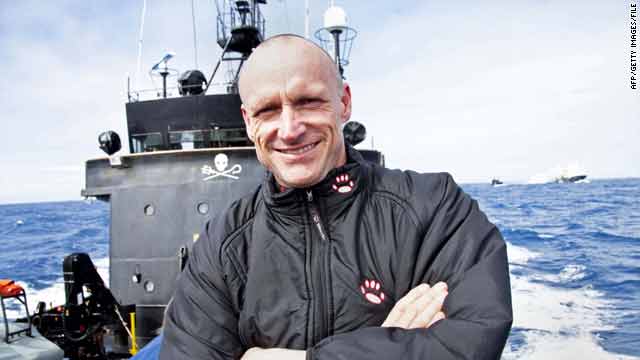 (CNN) -- Anti-whaling activist Peter Bethune was given a two-year suspended prison sentence and five years' probation Wednesday by a Tokyo district court judge for his role in boarding a Japanese whaling ship.

Bethune was found guilty on five charges, ranging from assault against whalers to trespassing into a whaling vessel. Bethune had previously pleaded guilty to all charges but assault. He could have received up to 15 years behind bars on charges.

Bethune testified during his trial in May that he had no intention of hurting anyone when he protested Japan's whale hunt.

The New Zealand activist from the Sea Shepherd Conservation Society said that he believed the bottles of butyric acid he threw at the Shonan Maru 2 whaling ship were non-toxic and would not harm anyone.

Prosecutors said the butyric acid burned two crew members of the Japanese whaling fleet, but Sea Shepherd called it a harmless, albeit rancid, liquid. Butyric acid is found in rancid butter and vomit.

At the May hearing, he tearfully described the January collision between the Shonan Maru 2 and the Sea Shepherd's multi-million-dollar speedboat, the Ady Gil. The crash sunk the Ady Gil, which Bethune captained.

"It's encouraged us. It's certainly motivated us, and we're going back to the Southern Ocean with far more support than ever," said Paul Watson, Sea Shepherd founder. "I hope that we'll be much more effective because of it."

"Pete Bethune is a hero in New Zealand," Watson added. "He's a hero worldwide to people who want to see the end of whaling."

"They're targeting endangered whales in an established international whale sanctuary in violation of the Antarctic treaty," Watson said. "They're criminals."