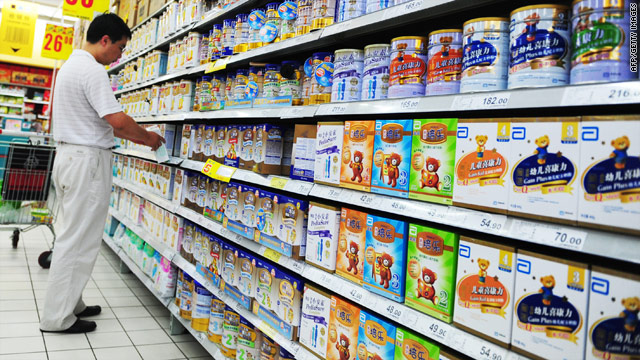 At a news conference at the Ministry of Health, authorities attempted to reassure citizens rattled by reports of the tainted milk. Two years ago, six babies died and hundreds of thousands of children were sickened by melamine-tainted milk.

While work is underway to regulate the dairy products, it will not adversely impact purchases of milk products currently offered for sale, officials asserted.

"We are making changes, but I assure you it will not impact milk products consumed by the public," said Chen Junshi, a senior researcher at the National Institute for Nutrition and Food Safety. The government's standards for processed dairy products are sufficient, he said, and businesses are required to exceed that standard.

A batch of contaminated milk powder was found in Gansu province and was traced back to the Dongyuan Dairy Factory in Minhe County, in neighboring Qinghai province, last week. The factory owner and a production manager were detained. Representatives from the Ministry of Health declined to comment, citing an ongoing investigation by authorities. Calls to the factory went unanswered.

Clear and uniform regulations nationwide are required to maintain the safety of China's dairy products, said Wang Zhutian, deputy director of the National Institute of Nutrition and Food Safety at the China Center for Disease Control.

"We have hundreds of thousands of monitoring bodies right now and we need to standardize our rules," Wang said. "Businesses are, of course, the first parties who are responsible for any quality issues. However, we also need to establish a universal regulation. China's development isn't at that level at this time, but we hope to unify our processes as quickly as possible."

But given China's size and unbalanced development, more food safety problems are likely, Su Zhi, director of the health supervision bureau in the Ministry of Health, said at a forum Monday, according to the state-run Xinhua news agency.

"With such a huge territory and population in China, it's hard to avoid all food safety threats and to put all unscrupulous businessmen under scrutiny," Su said, Xinhua reported.

Melamine is commonly used in coatings and laminates, wood adhesives, fabric coatings, ceiling tiles and flame retardants. Some Chinese dairy plants add the chemical to milk products so they appear to have a higher protein level.

Xinhua did not say last week whether anyone was sickened by the latest batch of tainted milk powder.

The scandal in 2008 erupted when tainted milk killed at least six babies and caused kidney stones and urinary tract problems in hundreds of thousands of children.

In all, 21 people were tried and sentenced in 2009 for their roles in the scandal. Two were executed.