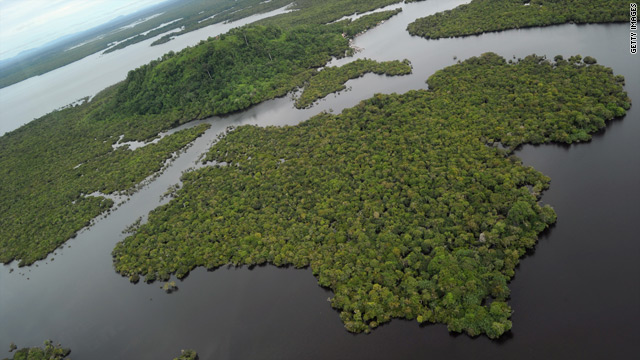 London, England (CNN) -- The destruction of the world's mangrove forests is happening up to four times faster than the world's land-based forests, according to a new United Nations report.

A study commissioned by the U.N. Environmental Program (UNEP) reports that one fifth (around 35,500 square kilometers) of the world's mangroves -- forests straddling both land and sea -- have been lost since 1980.

Although the study reports that annual destruction has slowed to 0.7 percent a year, the authors of the "World Atlas of Mangroves" report warn that continued coastal destruction and shrimp farming could cause financial and ecologic havoc.

Studies estimate mangroves generate between U.S.$2000 to $9000 per hectare annually from fishing -- much more than the aquaculture, agriculture and tourism, which the U.N. says are the biggest drivers of mangrove loss.

Achim Steiner, U.N. Under-Secretary General and Executive Director, U.N. Environment Program (UNEP), said in a statement: "This atlas brings our attention onto mangroves and puts them up front and central, plotting where they are, describing where they have been lost, and underlining the immense costs those losses have had for people as well as nature."

Mangroves cover around 150,000 square kilometers and are found in 123 countries worldwide. The biggest concentration (21 percent) of the world's mangroves is in Indonesia, with Brazil home to around nine percent and Australia, seven percent.

Mark Spalding, lead author of the report and senior marine scientist with The Nature Conservancy, told CNN: "The value of mangroves has been hugely overlooked. Mangroves are incredibly valuable, left standing."

Preserving the environmental diversity of mangroves is essential to maintaining what Spalding calls "the real hard dollar values" for the people who live near them and depend on their survival.

Apart from providing a degree of coastal protection for communities -- there is evidence that mangroves reduced the impact of the Indian Ocean tsunami in 2004 -- mangroves are also of vital economic importance to locals.

The U.N. estimates that mangrove-related species support 30 percent of all fish catch and almost 100 percent of shrimp catch in southeast Asian countries. Mangroves and associated habitats in Queensland, Australia, are thought to support 75 percent of commercial fisheries species.

The forestry aspect of mangroves is also important economically.

The wood is dense, rot and termite resistant, Spalding says, making it good for use as timber or as charcoal, among the best in the world, he said.

"It's highly productive so you can continue to harvest it, which is rare," Spalding said.

It's taken Spalding five years to piece together the "World Atlas of Mangroves," and despite the findings, he remains positive that mangroves can be preserved.

"My sense is that we can turn this around into a good story," Spalding said.

"Knowing what we know now, mangroves can be restored and help us fight climate change," he said. They are incredibly resilient ecosystems, which aren't bothered by increasing temperatures, he said.

"These are habitats that are going to be around with us if we just look after them and the economic benefits will just accrue. There has been sustainable use of mangroves in Bangladesh and other parts of Asia for over a century."