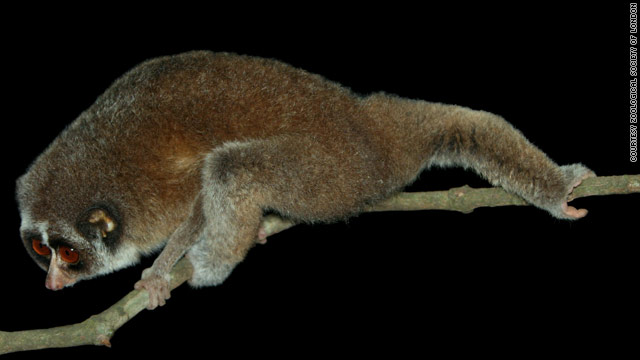 The Horton Plains slender loris has never been photographed before -- and only seen four times since 1937.
STORY HIGHLIGHTS
RELATED TOPICS

(CNN) -- Wildlife researchers in Sri Lanka have photographed one of the world's most reclusive primates for the first time.

Sightings of the Horton Plains slender loris -- a small nocturnal primate with extremely thin arms and legs and huge round eyes -- are so rare that the creature has only been seen four times since 1937.

Conservationists feared the species had become extinct during a 63-year gap between sightings from 1939 to 2002.

Populations of all types of slender loris, which are native to the rainforests of Sri Lanka and southern India, have been in decline in recent years because of destruction of their forest habitat by logging, agriculture and development.

That prompted an 18-month study of the creatures led by researchers working for the Zoological Society of London's Edge project -- a conservation initiative dedicated to raising awareness about the plight of animals on the brink of extinction. Researchers from the University of Colombo and the Open University of Sri Lanka also took part.

Research leader Saman Gamage said more than 1,000 nocturnal studies in 120 different forest areas had been conducted as part of the study.

"This discovery is a great reward for the ongoing field research we undertake across much of south-western Sri Lanka," Gamage said.

The pictures show a 20-centimeter long male adult sitting on a forest branch forest. Conservationists have discovered it appears to have shorter and sturdier limbs than other loris; a possible adaptation for the cooler, high-altitude montane -- or cloud -- forest in which it lives.

That could mean the Horton Plains slender loris is a distinct species in its own right, said Gamage. Results of the study are published in the latest edition of the journal Primate Conservation.

"We are thrilled to have captured the first ever photographs and prove its continued existence -- especially after its 65 year disappearing act," said Turner.

"The discovery improves our knowledge of this species, but we need to focus our efforts on the conservation and restoration of the remaining montane forest where this species still exists. Currently this accounts for less than one percent of the land area of Sri Lanka."