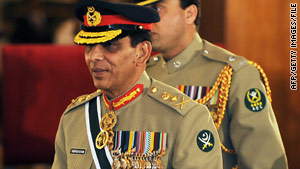 Gen. Ashfaq Pervez Kayani took over as army chief in 2007, after the retirement of Gen. Pervez Musharraf.
STORY HIGHLIGHTS

Islamabad, Pakistan (CNN) -- The Pakistani government has extended by three years the tenure of the national army chief, Gen. Ashfaq Pervez Kayani, who has overseen anti-terrorism efforts against the Taliban.

Pakistani Prime Minister Yousuf Raza Gilani made the announcement late Thursday in a brief televised address to the nation.

Gilani said Kayani's new tenure will begin in November, the same month he had been scheduled to retire.

Kayani took over as army chief in November 2007, after the retirement of Gen. Pervez Musharraf, who also was serving as president.

U.S. officials have publicly praised Kayani's leadership, under which the Pakistani military launched offensives against the Pakistani Taliban in South Waziristan, the Swat Valley and other regions in northwest Pakistan.

"This decision has been made because of his active role in the war against terrorism and in the implementation of law," Gilani said in his televised address. "We believe with the leadership of Gen. Ashfaq Pervez Kayani the war will reach its logical end with success."