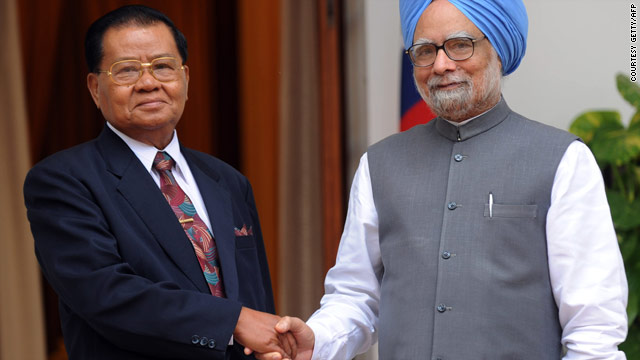 New Delhi, India (CNN) -- India accorded a red-carpet welcome Tuesday to the top leader of Myanmar's military junta, who is on a five-day visit aimed at strengthening diplomatic and economic ties between the neighboring countries.

Gen. Than Shwe received a ceremonial reception in the sandstone presidential palace in New Delhi before he drove down to the shrine to India's independence leader, Mahatma Gandhi, to pay homage.

The military ruler's trip underscored the close relationship between the two nations -- one seen as one of the world's most vibrant democracies, and another despised by the West as a repressive regime.

In 1951, the two countries signed what they called a "treaty of friendship," and over the past few years, bilateral trade has soared to almost $1 billion, according to Indian officials.

Than Shwe's visit began on Sunday with a tour of sacred Buddhist sites in eastern India.

It came days after U.S. Secretary of State Hillary Clinton urged India and other countries in the region to push Myanmar, formerly known as Burma, to comply with U.N. human rights resolutions and nuclear nonproliferation agreements.

"It is critical that Burma hear from you, its neighbors," she said in a speech at the Association of Southeast Asian Nations meeting.

Clinton described life in Myanmar as "dangerous" for the country's inhabitants and called upon other nations to push for democratic reforms there.

"We would encourage India and other countries to send a clear message to Burma that it needs to change its course," State Department spokesman P.J. Crowley said last week.

The Myanmar general's itinerary also includes tours of India's information-technology hub in Hyderabad and the industrial center of Jamshedpur.

His visit is the second by a top junta administrator in a year.