Japan carries out first executions in a year 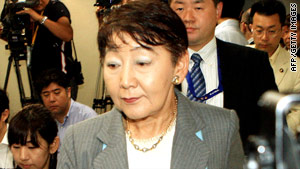 One of the men, Kazuo Shinozawa, was put to death for killing six female clerks at a jewelry store in 2000 and setting the store on fire.

The other person, Hidenori Ogata, was convicted of killing two people in 2003, the justice ministry said.

Japan last carried out an execution in July 2009, when the conservative Liberal Democratic Party was in power.

Justice Minister Keiko Chiba is a former member of a group of lawmakers opposed to capital punishment -- the Japan Parliamentary League Against the Death Penalty.

Speaking to reporters after Wednesday's execution, she said that Japan needs a public discussion on whether to continue the practice of capital punishment.

Witnessing the enforcement with my own eyes made me think about death punishment deeply again.
--Justice Minister Keiko Chiba
RELATED TOPICS

She said she has asked for a review at the justice ministry.

"Witnessing the enforcement with my own eyes made me think about death punishment deeply again," she said, adding that she had attended the executions. "Also, I felt the need of a fundamental discussion to review about death penalty."

Amnesty International Japan said a review is welcome but first, the executions have to be halted.

"We feel strong anger and disappointment over the executions today," the group said. "We highly accept [the ministry's] stance [of] setting up a study session. ... First of all, they must stop the executions."