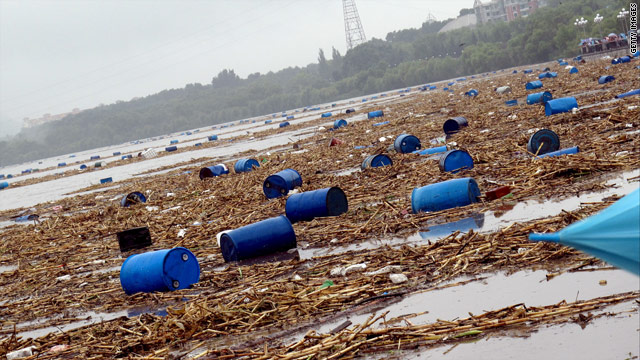 Barrels from a chemical plant float in the Songhua river in Jilin on July 28, 2010.
STORY HIGHLIGHTS
RELATED TOPICS

The death toll from the flood waters in Jilin province rose to 27 in Yongji county. Two more people died in neighboring Shuangyang city, according to a statement from Jilin's civil affairs department, Xinhua news agency reported.

The flooding has forced more than 254,000 people from their homes and collapsed about 22,000 buildings, civil affairs said.

On Wednesday, the rising water hit a chemical plant in Jilin and 7,000 containers washed into the Songhua River -- 3,000 of which were filled with explosive chemicals, Xinhua said.

Emergency teams were mobilized to recover the spilled fluid. Authorities had recovered 1,500 containers by Thursday evening.

Jilin is the latest province to be hit by fatal floods that have left 928 people dead and 477 missing nationwide, according to China's flood control and drought relief headquarters.