Discussions to resume Friday with North Korea over warship sinking 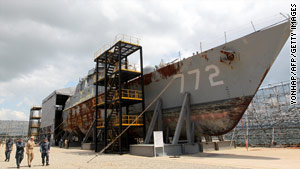 U.S. troops get a look at the wreck of the South Korean warship Cheonan a week ago.
STORY HIGHLIGHTS

(CNN) -- The U.S.-led United Nations Command will meet again Friday with North Korea to discuss the sinking of a South Korean warship, according to the U.S. Forces Korea website.

The meeting is to get under way at 10 a.m. (9 p.m. Thursday ET) in Panmunjom, a village that sits in the middle of the demilitarized zone on the border between the two countries.

It represents a continuation of talks held July 23, when conditions were discussed for talks about the sinking of the South Korean ship Cheonan on March 26, the website said.

During last week's almost two-hour meeting, the U.N. Command reminded the North Koreans of the Security Council's condemnation this month of the Cheonan attack.

The Security Council did not mention North Korea by name but called for "full adherence" to the armistice agreement that halted fighting in the Korean War in 1953 and encouraged "the settlement of outstanding issues on the Korean peninsula by peaceful means."

An international inquiry found North Korea culpable for the March attack, which killed 46 South Korean sailors. But Pyongyang denies a role in the incident, which elevated tensions between the two countries, which are still technically at war.

The announcement of Friday's planned meeting came a day after completion of war games between South Korea and the United States that involved 8,000 military personnel in the waters off South Korea.

"These defensive, combined training exercises are designed to send a clear message to North Korea that its aggressive behavior must stop, and that the ROK [South Korea] and U.S. are committed to enhancing our combined defensive capabilities," said Gen. Walter L. Sharp, commander, Combined Forces Command, in a statement.

The games provoked the north's ire. "Recently the U.S. strategic strike forces including nuclear-powered aircraft carrier have stormed South Korea and its surrounding areas like a flock of crows to get hell-bent on the war games, driving the situation to the phase of war," North Korea's state-run KCNA news agency said, quoting the North Korean daily newspaper Rodong Sinmun, which is also state-run.

"The grave situation prevailed on the Korean Peninsula more clearly proves that it is quite natural and right for the DPRK [Democratic People's Republic of Korea] to have concentrated efforts on bolstering up its defense capability."

KCNA published on Thursday a statement from the Solidarity for Democracy, People's Life, Peaceful Reunification and Sovereignty of South Korea "denouncing the U.S. imperialists and the South Korean puppet warmongers for their frantic joint military exercises."

The statement, which KCNA said was released Monday, said the exercises were "rendering the situation of the Korean Peninsula so strained that a war may break out any time."

North Korea has demanded that it be allowed to conduct its own investigation of the Cheonan's sinking.