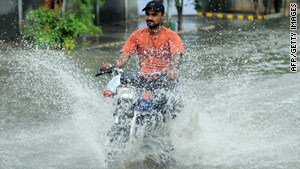 At the same time, a top official in Khyber-Pakhtunkhawa province pressed Pakistan's president for help, according to APP.

The news agency said Assembly Speaker Kiramatullah Khan told legislators he had asked President Asif Ali Zardari for a supply of emergency boats, during a phone call on Thursday.

At least 90 people have been killed since Wednesday due to floods caused by monsoon rains, a provincial minister told CNN.

Bashir Ahmed Bilour, a provincial minister in Khyber-Pakhtunkhawa province, said many of the victims died when flood waters swept away hundreds of mud houses in parts of Swat Valley and the districts of Shangla and Tank.

The floods have also washed away thousands of acres of crops and dozens of government buildings, local businesses and schools, Bilour said.

Photographs from Getty Images showed flood victims struggling to cross a swollen river in the town of Nowshera. The pictures showed children being ferried across the water in overcrowded boats, and more able-bodied people helping the elderly to higher ground.

Supplies from the U.N. agency will go first to the two hard-hit villages of Talli and Sultan Kot in Sibi district, APP said.