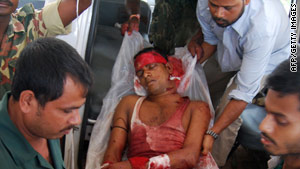 The roadside bomb went off as the soldiers were patrolling an area in the state of Assam, said P.K. Goswami, district commissioner. The victims are members of the nation's Central Reserve Police Force.

No one has claimed responsibility for the attack.

Police suspect it was carried out by a faction of a local rebel group, the National Democratic Front of Bodoland.