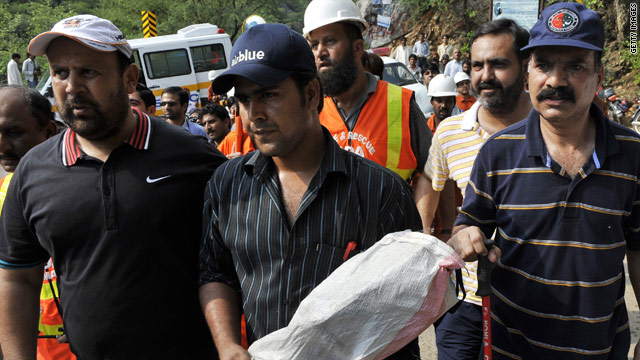 A Pakistani official carries the black box from the crashed Airblue passenger plane at the Margalla Hills on the outskirts of Islamabad on July 31, 2010.
STORY HIGHLIGHTS

Islamabad, Pakistan -- The data recorders for the plane that crashed and killed 152 people in Pakistan have been found, a government official said Saturday.

Junaid Amin, the head of Pakistan's Civil Aviation Authority, told CNN the plane's voice and the flight data recorders have been found at the crash site. He says the analysis of the data and completing the crash investigation could take several months.

Amin said the items will be sent to Germany or France since Pakistan doesn't have facilities to perform the analyses.

The Airblue plane was headed to Islamabad from the sea port city of Karachi on Wednesday when it crashed in a hillside while trying to land.

Pakistan observed a day of mourning Thursday for victims of the accident - the worst passenger plane crash on Pakistani soil.

Officials do not know if weather played a factor in the crash Wednesday. Pakistan is in the midst of the annual monsoon season, when rain sweeps across the subcontinent from June until September.

The deadliest crash involving a Pakistani airline occurred in September 1992, when a Pakistan International Airlines Airbus crashed into a mountain in Nepal, killing all 167 people on board, the Associated Press of Pakistan reported.

The Airbus A321 was carrying 146 passengers and six crew members, the airline said. The U.S. Embassy in Pakistan said two of the people aboard were American citizens.