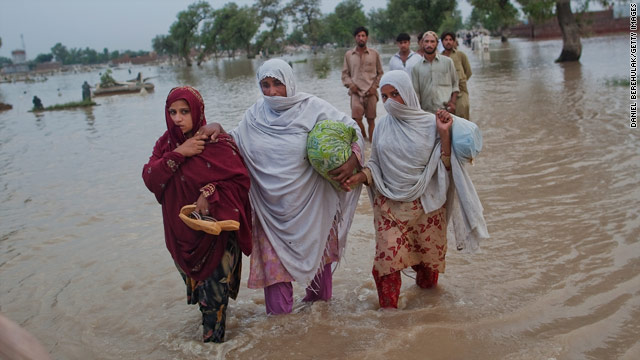 The Obama administration hopes its response to floods in Pakistan will help improve America's image among the Pakistani public.
STORY HIGHLIGHTS

Washington (CNN) -- The Obama administration is looking to turn crisis into opportunity, hoping its robust response to the devastating floods in Pakistan will help improve its poor image among a skeptical Pakistani public.

Since the floods arrived, the United States has been opening the flood gates of aid, starting with an initial pledge of $10 million in humanitarian relief. U.S. disaster experts were dispatched to Pakistan, and American helicopters fanned out across the affected area, airlifting people to safety and delivering supplies. At Pakistan's request, four Chinook and two Black Hawk helicopters are on the way.

Lest Pakistanis think the United States isn't sensitive to their Muslim traditions, Washington sent more than 300,000 halal -- or, by Islamic dietary law -- meals to the country, along with water filtration systems.

And the United States is building bridges in Pakistan. Literally. The U.S. has offered to build temporary replacements for highway bridges damaged by flooding in the country.

The State Department is working on several public-service campaigns -- including one in the United States to urge U.S. Pakistanis to donate through the texting campaign, and another for a Pakistani audience to drive home the point that the U.S. will be there for Pakistan in its time of need.

The United States also is resurrecting a texting campaign it used to help Pakistanis displaced by last year's fighting between Pakistani forces and extremists in the tribal areas. Americans can donate $10 by texting the word "SWAT" to 50555, with the donations going to a United Nations organization that is providing tents and emergency aid to displaced families.

The U.S. relationship with Pakistan, which it views as a strategically important country, continues to be a work-in-progress. Since taking office, the Obama administration has spent a huge amount of time, effort and money in outreach to Pakistanis and has promised not just aid, but a commitment of partnership. The struggle is convincing Pakistan that U.S. interests are aligned with its own.

When it comes to Pakistan, the United States seems to always get its knees cut out from under it just as progress seems to loom. Most recently, Secretary of State Hillary Clinton's triumphant return from a July visit to Islamabad, Pakistan, which was widely considered a successful trip, was interrupted by the leak of thousands of Pentagon documents on the WikiLeaks website, many of which criticized the Pakistani military's ties to the Taliban.

But the United States has learned over time that the way it reacts to a disaster can also be a game-changer. Just before the 2004 Asian tsunami, U.S. opinion in the Muslim world was at an all-time low. But massive U.S. aid to Indonesia and other Asian Muslim countries helped the United States regain its footing in the region and improve its image.

Specifically in Pakistan, the United States found a significant improvement in its image after the earthquake in 2005. Public opinion in Pakistan toward the U.S. was on a definite upswing after a substantial U.S. relief response, but quickly spiraled back downward because the U.S. attention toward the country trailed off.

Once again, the United States is hoping for a similar boost, offering wary Pakistanis an opportunity to view their relationship with the U.S. through a different lens.

But this isn't just about the relationship between the United States and Pakistan. It's about the fragile relationship between Pakistanis and their own government. The United States knows only too well from its own experience with Hurricane Katrina and the recent oil spill in the Gulf of Mexico that citizens expect a response from their own government and grow disillusioned when they don't get it.

Already plagued by mistrust among its people, the Pakistani government is competing for hearts and minds with extremists groups, which are rushing to help those in need. In 2005, the Pakistani government's failure to tackle immediate relief efforts after the quake enabled Islamic charities linked to terrorist groups like Lashkar-e-Taiba, which was blamed for the 2008 attacks on the Indian city of Mumbai, to fill the vacuum with aid, services and camps for displaced people.

The difference between now and then is that the Pakistani's government inept response was at best an embarrassment. The country was more stable and the economy was in good shape. Pakistan didn't have ten-hour electricity shortages and wasn't battling a civil war with a massive insurgency with suicide bombings every week.

Today's Pakistan is much more fragile, and the United States doesn't want the floods to be the straw that breaks the camel's back. Public relations benefits aside, millions of people devastated by floods and afflicted with disease and famine would only bring more instability to Pakistan. That would further hamper Pakistan's ability to join in the fight against the Taliban and al Qaeda. And that is bad for the United States and is another incentive for the quick infusion of aid.

What's more, one of the areas hit hardest by the heavy rain and flooding is Swat, the infested cross-border region with Afghanistan, where the Taliban and al Qaeda are believed to be hiding and where the heart of fighting between Pakistani forces and the Taliban goes on. The stakes for the United States in this underbelly of extremism couldn't be higher.

On the plus side, the U.S. engagement with Pakistan is deeper than it has ever been and has created an office of the Special Representative for Afghanistan and Pakistan, headed by Richard Holbrooke. The office is equipped with a small army of experts who on the day of the flood were able to assemble a whole-of-government response in close consultation with the White House.

The State Department also hopes the new technologies the office helped pioneer in Pakistan, such as a U.S.-backed mobile social network and the Swat texting campaign, will also prove effective tools to help Pakistanis themselves respond.

Undoubtedly the hope is the U.S. response will save lives in Pakistan, but whether it will win hearts and minds among Pakistan's deeply skeptical public remains to be seen.