By Mukhtar Ahmad, For CNN 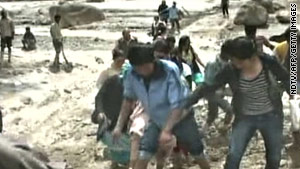 Srinagar, India (CNN) -- The death toll has risen to 112 as a result of flash floods and landslides in a town in northern India, a police official said.

At least 375 people were being treated for injuries at hospitals in the city of Leh, said Officer Farooq Ahmad. Twenty-five soldiers in the Indian Army are missing, said Army Lt. Col. J.S.Brar.

The rain came shortly after midnight and took sleeping residents by surprise.

About 6,000 soldiers were deployed in the relief efforts, Brar said. Helicopters have also been called in as damaged roads made it difficult to reach the affected areas.