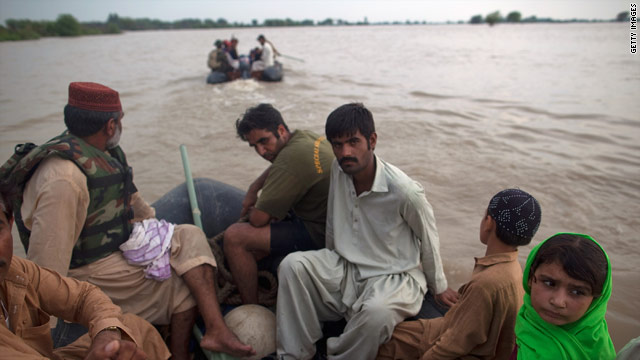 The Pakistan Navy rescues a family on August 6, 2010 in the village of Panu Akil, near Sukkur, Pakistan.
STORY HIGHLIGHTS

Chachran Sharif, Pakistan (CNN) -- Imam Baksh used two cots as shelter over his head and a third to shield him from the drenched earth.

The 80-year-old man was among thousands in Chachran Sharif who could see his home submerged under water -- about half of the Pakistani town looked more like a lake than a community of people.

Even the mosque was under water and people were using boats to rescue their cows, goats and sheep, dragging the terrified animals onto dry -- or at least dryer -- land.

Chachran Sharif, in Pakistan's Punjab province, is one of many villages, towns and cities across Pakistan reeling from torrential monsoon rain and flooding that authorities now say have affected 12 million people and killed as many as 1,500.

And no relief is in sight as the bloated Indus River overflows its banks and more rain continues to fall. Pakistan's Meteorological Department issued an alert for the southern province of Sindh, far away from the northern Swat Valley, where the crisis began.

"Pakistan has been hit by the worst flood of its history," said Prime Minister Yousuf Raza Gilani in a televised speech Friday. "As I speak, the flood is still engulfing new areas and adding to the scale of devastation."

Gilani said a true assessment of the loss to life and infrastructure can be determined only after the water recedes. He appealed to the international community and to Pakistanis living abroad to dig deep into their pockets.

Patrick Fuller has worked for the International Red Cross for 15 years and been involved in other disasters. Still, he said Friday he was shocked by what he saw.

"These people need help desperately and the world needs to wake up," Fuller told CNN. People can't go back to their homes. They are living in a precarious situation."

He said there has been a conspicuous absence of aid in some areas, despite efforts by the Red Cross and other international aid groups.

Parts of the Swat Valley remain inaccessible by road; helicopters provide the only way in or out for people, food, clean water or medicine.

At Chakdara, south of the valley's largest city, Mingora, people queued for more than four hours to cross a rickety temporary suspension bridge above swirling brown water. With the main highway crossing destroyed, people trying to escape were using a decrepit British-built 19th century bridge that was damaged in the rain.

Meanwhile, among the suffering, anger grew at the government for perceived lack of action. Pakistanis hurled stinging criticism at President Asif Ali Zardari, who was in England for talks with British Prime Minister David Cameron during the worst of the crisis.

Advisor Farahnaz Ispahani said Zardari was simply doing his job as head of state and had ensured the crisis at home was being adequately addressed by the prime minister.

In Chachran Sharif, there were few signs of aid for the flood-displaced and frustration mixed with drizzle in the air.

"We elected him," one man said about Zardari. "Where is he?"