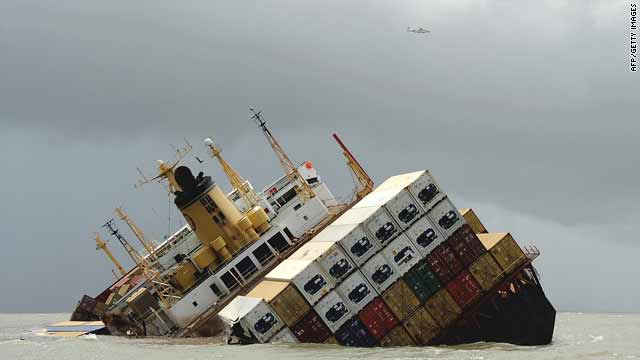 An aircraft flies over the damaged cargo ship MSC Chitra off the Mumbai coast on Monday.
STORY HIGHLIGHTS

An Indian Coast Guard Commandant, S.S. Dasila, told CNN that more than 250 of over 1,200 containers had tumbled down from one of the ships now tilting dangerously to its side.

He described the situation as a "navigational hazard" because of drums floating around the grounded vessel.

For now, helicopters and airplanes were spraying oil-dispersant chemicals at the slick, he said.

Also, crews were on an alert for any environmental impact, as they monitored mangrove swamps and beaches along the coastline, Dasila said.

Mumbai's port authorities have suspended operations as oil has spread up to five nautical miles on the navigational channel, he added.

According to Dasila, it might take two weeks to clean up the site thoroughly.

On Saturday, the Panamanian-flagged JNPT MSC Chitra vessel collided with a vessel from St. Kitts and Nevis about 1.5 nautical miles off Mumbai, he said.

All crew members were rescued safely after the collision, officials said.