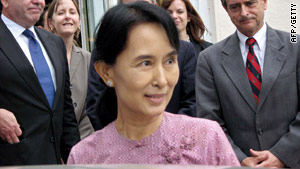 No vote: Aung San Suu Kyi in Yangon in November

1989: Burma changes its name in English to Myanmar and the name of the capital from Rangoon to Yangon. Suu Kyi is placed under house arrest for charges of trying to divide the military, charges she denies.

1990: Suu Kyi's National League for Democracy party wins more than 80 percent of the legislative seats in the polls, the first free elections in the country in nearly 30 years. The junta refuses to recognize the results.

August-September 2007: Huge fuel price increases spark protests, later dubbed the "saffron revolution" after the robes of monks who also joined in. The protests gained steam over weeks. On September 24, Buddhist monks led about 100,000 in the largest anti-government demonstrations since 1988. Two days later, government forces cracked down.

October 20, 2007: U.N. General Assembly approves a resolution condemning the government crackdown and asking for the release of political protesters.

May 14, 2009: Suu Kyi is arrested and charged with government subversion, relating to an incident in which American John Yettaw swam uninvited to her lakeside home.

August 10, 2009: Myanmar court convicts Suu Kyi, then 64, for breaching the terms of her house arrest over Yettaw's visit. She is sentenced to 18 more months in home confinement, as were two of her house companions. Yettaw is sentenced to seven years of hard labor, but U.S. Senator Jim Webb obtains his release soon afterwards.

March 10, 2010: Junta announces new election law that disqualifies Suu Kyi from taking part in upcoming national elections, citing her conviction in court. She has spent more than 14 years of the last 20 years under house arrest.

April 26, 2010: Myanmar's Prime Minister Thein Sein and several other ministers resign from their military posts in order to participate in upcoming elections.

May 7, 2010: The NLD refuses to register for the election, thereby disqualifying itself as a political party and officially dissolves. On the same day, supporters of Suu Kyi say they will form a new political party, National Democratic Force, which comprises some members of NLD.

August 13, 2010: Myanmar will hold elections on November 7, in the military junta-led nation's first vote since 1990.