Islamic cleric to stay in custody until December 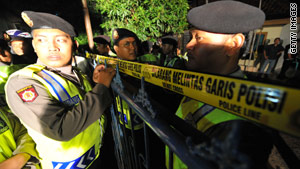 Police seal a raided home in West Java province, on May 12. Five suspected terrorists were killed in raids in Indonesia.

Abu Bakar Bashir's arrest allows the police to keep him in custody until December 13.

Bashir was detained August 9, when police said he played a key role in the establishment of a militant training camp in Indonesia's Aceh region.

Under Indonesia's anti-terror law, police can detain a suspect for questioning for seven days. An arrest warrant was issued Sunday, allowing authorities to extend Bashir's detention.

His lawyers refused to sign the warrant, saying they question the circumstances of his detention and arrest.

Bashir "rejects and denies all the charges against him," lawyer Achmad Michdan said.

The Muslim cleric has also refused to answer questions in his interrogations. Bashir believes his arrest was a result of pressure by the west, particularly the United States, Michdan said.

Bashir -- a religious leader known for his anti-Western rhetoric -- has been arrested twice previously for his activities in connection with militant groups.

Police raided that camp in February and arrested dozens of militants who allegedly were planning terror attacks in Indonesia similar to those that took place in Mumbai, India, in 2008.

Officials said Bashir knew about that camp, helped fund it and appointed religious teachers to provide the militants with spiritual guidance. Bashir allegedly appointed an extremist fugitive known as Dulmatin as the field commander.

Dulmatin was killed in another police raid shortly afterward.

In May, several members of a hardline organization Bashir founded -- the Jama'ah Ansharut Tauhid, or JAT -- were also arrested and charged with raising funds for the training camp.

Bashir was first arrested after the Bali bombings that killed more than 200 people in 2002. At the time, he was the spiritual leader of Jemaah Islamiyah, whose stated goal is to create an Islamic state comprising Malaysia, Singapore, Indonesia and the southern Philippines.

He was charged with terrorism and immigration violations and served 18 months in jail.

Two years later, before his expected release in 2004, Bashir was arrested again on charges of helping incite the August 2003 bombing of the Marriott hotel in Jakarta.

He served two-and-a-half years in jail and was released in June 2006. In 2008, Bashir established Jama'ah Ansharut Tauhid.