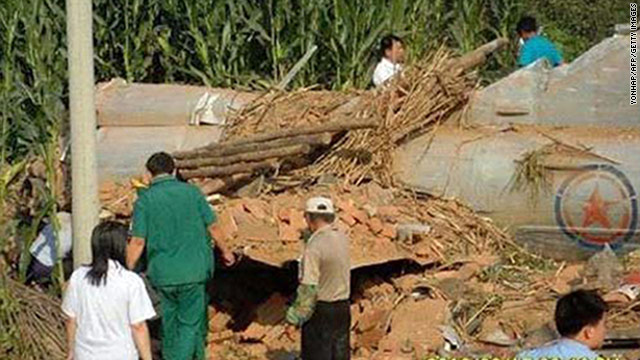 China's official Xinhua news agency said that Pyongyang has apologized to Beijing for the incident and the two sides have "reached a consensus on dealing with the aftermath."

The plane went down Tuesday at Lagu township in Fushun county, killing the pilot and destroying one home on the ground. The crash site in Liaoning province is about 200 kilometers (120 miles) away from a North Korean air base in the border town of Sinuiju, according to South Korea's Yonhap news agency.

An employee at Songgang Iron Mine, a company near the crash site, told CNN Wednesday that armed police officers and special forces agents immediately cordoned off the area after the plane went down.

Photographs of the wreckage purportedly taken by an eyewitness have been circulating on Chinese websites, showing the North Korean air force emblem on the fuselage beneath the tail of the aircraft. Military enthusiasts online have identified it as a Russian-built MiG jet but differed on the specific model, with some calling it a MiG-21 fighter and others claiming it to be a MiG-15 trainer.

Xinhua's latest report did not give details on the plane.

Yonhap had earlier quoted unnamed sources in South Korea as saying the plane's pilot may have been trying to defect from North Korea to Russia. Chinese commentators had speculated that the plane may have run out of fuel.