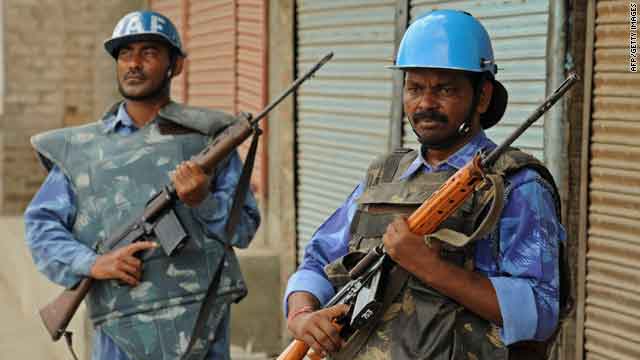 Srinagar, India (CNN) -- The Indian army accused Pakistani troops of violating a cease-fire agreement early Thursday by firing across the Line of Control that divides Kashmir.

Pakistani border troops fired for about 90 minutes in Poonch district of the Indian state of Jammu and Kashmir, said Biplab Nath, an Indian army spokesman.

A spokesman for the Pakistani military confirmed the gunfire, but said Indian troops fired at their soldiers. Spokesman Maj. Gen. Athar Abbas said the two nations have agreed to meet soon to discuss the incident and seek clarification.

Nath said there were no casualties on the Indian side.

"Our assessment is that this firing was to primarily assist infiltration of terrorists," he said.

Such ceasefire violations have been common since 2003, but Nath described the latest incident firing as "major."

Kashmir has been a source of bitter dispute between India and Pakistan since the independence of both nations in 1947.

Under terms agreed by the two countries, Kashmir's rulers could either opt to merge with India or Pakistan or remain independent. One part sided with Pakistan. The ruler of the other part sided with predominantly Hindu India, sparking a controversy among the region's Muslim majority.

India and Pakistan have fought three wars over Kashmir and militants, who India says are backed by Pakistan, have been fighting since the late 1980s to end Indian rule in the region. A cease-fire to end the violence was agreed to in 2003.

Both India and Pakistan routinely accuse each other of firing across the border.