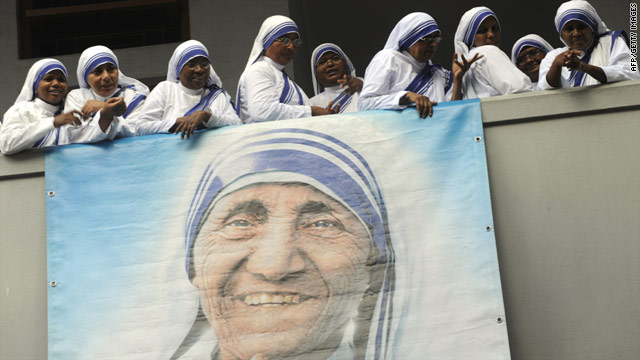 (CNN) -- A solemn Mass at the Missionaries of Charity in Kolkata, India, marked the 100th anniversary of Mother Teresa's birth on Thursday.

People from all walks of life gathered at the global headquarters of the order of nuns, which Mother Teresa founded 60 years ago.

"It's a great day of joy for all of us to celebrate the gift of Mother's life," said Sister Nirmala, Mother Teresa's immediate successor. "Mother who allowed God to live in her has put a bright light in the world, enlightening the hearts and minds of so many people."

Sister Prema, the current head of the order, said, "Mother is a person who till today -- and also for time to come -- will bring people of all walks of life together to serve, to laugh and to be united."

A message from Pope Benedict XVI was read out at the Mass.

"I am confident that this year will be for the church and the world an occasion of joyful gratitude to God for the inestimable gift that Mother Teresa was in her lifetime and continues to be through the affectionate and tireless work of you, her spiritual children," the pontiff's statement said.

She arrived in India in 1929 and dedicated her life to help those in need. She received a Nobel Peace Prize for her work in 1979.