Manila siege: Disbelief amid the gunfire

By Steve Lunt, Special to CNN 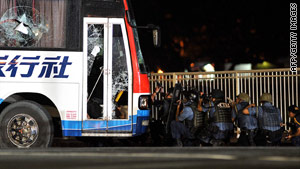 Policemen take up position at the front of the bus in Manila.
STORY HIGHLIGHTS

(CNN) -- I could hear the rapid gun fire. There were several loud cracks, and it was distressing to know that each time the gun discharged behind the bus curtains, an innocent person could have been killed or seriously injured.

The 22 tourists from Hong Kong and three Filipinos were confined in a cocoon of danger.

This was the last day of the Chinese tourists' three-day vacation to the Philippines. That morning they had been looking forward to their trip to see a popular aquarium in Manila.

They did not realize that the uniformed, armed former police officer Rolando Mendoza, who got onto their bus, would soon commandeer the vehicle, setting off a 10-hour standoff that would end with eight tourists dead.

And in the end, the gunman, a decorated officer apparently upset over the loss of his job, was killed by police.

I arrived in the early afternoon to see the bus cordoned off in Luneta Park. More than 100 police officers were at the site, about 100 meters or so from the bus on both sides.

The gunman had released an elderly diabetic man, a mother and three children -- so there seemed to be some hope that the situation could be resolved without loss of life.

The atmosphere was surprisingly relaxed as heavily armed officers sat around in the shade, sheltering from a blazing sun.

Journalists also walked alongside with the SWAT team on reconnaissance trips, as they worked out their best angles of attack.

That night at 8 p.m., the atmosphere deteriorated as quickly as the weather. Torrential rain lashed down, lightning flashed and thunder rumbled.

We were within the range of Mendoza's M16 -- but it was difficult to gauge the direction of flying bullets. The Filipino man next to me turned a wooden bench on its end and stood behind that.

Three teenagers behind me peered into my camera screen to see close-up shots of the officers aiming their guns up at the bus, dark silhouettes in the heavy rain.

We could also see snipers crawling through the grass in front of us toward the bus. There was some chance of being hit -- but regard for personal safety sometimes seems to be suspended, along with the belief that this was really happening.

After focusing and framing the shot, I locked off my camera, hoping the tripod would afford some sort of cover. Clearer pictures could be seen on the floodlit other side of the bus; I thought about walking across to get those better shots, and I started to head over.

But on reflection, I realized this was perhaps a bad idea. My tripod in its case looks like a rifle, and given that snipers were crawling through the grass, Mendoza might be aiming our way.

So we kept our camp set up near a little sari-sari store. Heavy rain continued to lash down on the plastic tarpaulin stretched over the flimsy wood construction of the store, and I hoped it would not give way.

This was the only cover available, and several people were gathered around a television watching the local news coverage, showing what was happening on the other side of a bus only 100 meters away. There were looks of sadness and disbelief on the viewers' faces.

Some hours passed before I learned how many hostages had actually been killed. To be so close to the loss of innocent lives was truly distressing.

I covered the story for the next two days, even riding on the plane specially chartered by the Hong Kong government to bring back the survivors, relatives and the eight bodies.

The white coffins were loaded onto the plane under a somber sky, as the Chinese ambassador to the Philippines and other government officials looked on.

While interviewing the survivors' doctor on the plane, he described their emotions and tears, a loss of appetite - a loss of interest in anything. They will require a lot of support, perhaps for a long time, he said.

Arriving at Hong Kong passport control, the customs officer asked me if I had just come from the Philippines. He shook his head sadly, saying "bad, very bad."

I agreed, and my thoughts returned again to that painful night -- when senseless violence destroyed the lives of so many innocent people.