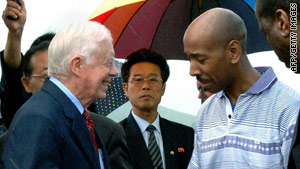 Gomes' family rushed toward the steps of the private plane, wiping tears from their eyes and hugging the man imprisoned in communist North Korea since January.

"Thank you President Carter for traveling to North Korea to bring Aijalon home," the family said in a statement. "For Aijalon, although returning home, the journey toward healing really just begins today."

"We are greatly pleased and thankful for [his] coming home," said Gomes' uncle, Michael Farrow. "We are thankful for all the prayers and God most of all."

Gomes' younger brother, Milton McCarthy Jr., 19, said, "It's an overwhelming amount of joy and happiness. It's a prayer being answered."

Carter did not make any comments about his trip, which was surrounded by speculation on whether the former president had met with the reclusive North Korean leader Kim Jong Il. Carter has a history of helping thaw frigid Pyongyang-Washington relations.

North Korea sentenced Gomes, 31, to hard labor and a fine of about $600,000 for illegally crossing its border with China and for an unspecified "hostile act." Gomes is believed to be a Christian activist.

"At the request of President Carter, and for humanitarian purposes, Mr. Gomes was granted amnesty by the chairman of the National Defense Commission, Kim Jong Il," said a statement from the Carter Center in Atlanta, Georgia.

Farrow said Gomes, who had been living in South Korea for about nine years, was last home at Christmas.

"That's not in his character," Farrow said. "He did not take things to the extreme. He may have just been trying to peek in and help others and teach them. He had good motives. I know he had good intentions."

Video: Released American back in U.S.

Nor does the family believe that Gomes tried to commit suicide, as suggested by North Korean reports, Farrow said.

"He's a spiritual person," Farrow said about his nephew. "Perhaps he got sick, his body shut down."

"We ... are relieved that he will soon be safely reunited with his family," said department spokesman P.J. Crowley. "We appreciate former President Carter's humanitarian effort and welcome North Korea's decision to grant Mr. Gomes special amnesty and allow him to return to the United States."

He added, "The U.S. and North Korea do not have diplomatic relations and, as the case of Mr. Gomes illustrates, travel to North Korea is not routine or risk-free."

Two American journalists -- Laura Ling and Euna Lee, who had crossed the border into North Korea in March 2009 and were arrested and sentenced to 12 years hard labor -- were released in August 2009 after an intervention by former U.S. President Bill Clinton.

Carter arrived in North Korea's capital, Pyongyang, Wednesday on a humanitarian mission to negotiate the release of Gomes. His visit was a private mission, and was not endorsed by the Obama administration.

Carter was greeted by Kim Gye Gwan, North Korea's chief negotiator at the six-party nuclear talks, and he also met the country's titular head of state, Kim Jong Nam, according to state-run media in North Korea.

"Jimmy Carter made an apology to Kim Yong Nam for American Gomes' illegal entry into [North Korea] and gave him the assurance that such case will never happen again," the Korean Central News Agency reported Friday.

KCNA also reported that Kim told Carter that North Korea wants to resume the six-party talks and work toward the denuclearization of the Korean peninsula.

Gomes didn't have only Carter as an advocate. Florida-based attorney Michael Cavendish, who doesn't know Gomes, started a letter-writing campaign when he learned about Gomes' sentencing in April. Some of his letters criticized the U.S. government, which he argued initially did not do enough to advocate for Gomes.

"Over the past four months, there were times when it seemed pointless to write another letter, to make another phone call, to talk to anybody about it at all, because the world is vast and there were all kinds of other stories going on that were sucking up people's attention. And things between the United States and North Korea and its allies were very, very grim," Cavendish said early Friday.