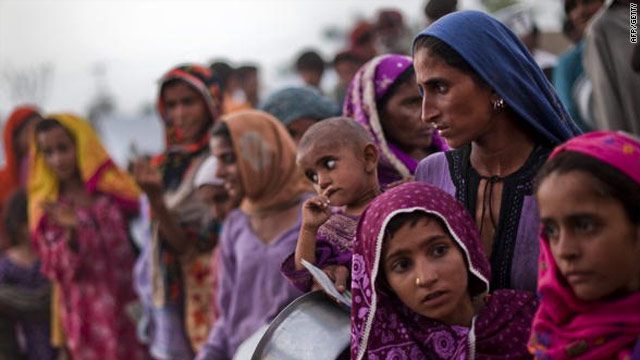 Pakistani villagers made homeless by the floods line up for food August 27 at a relief camp line in Sukkar.
STORY HIGHLIGHTS

(CNN) -- The death toll from Pakistan's massive flooding has climbed to 1,639, but the number could rise substantially as flood waters recede and more bodies surface, government officials say.

More than 17 million Pakistanis -- about the population of the Netherlands -- have been affected by the monsoon floods that began a month ago.

In the past few days, at least 1 million people have been displaced in Pakistan's Sindh province, the United Nations said. Authorities issued evacuation orders after a levee burst.

Want to help Pakistan? Impact Your World suggests how

The United Nations says more than $1 billion has been given or pledged. On Saturday, the United States announced the deployment of 18 additional helicopters to assist with relief efforts, according to the U.S. Embassy in Islamabad, Pakistan.

Video: Fleeing the water in Pakistan

About 15 other U.S. helicopters and three other aircraft have transported 2 million pounds of supplies, the embassy said.

But the need for help is greatly outpacing the supply.

"The magnitude of this crisis is reaching levels that are even beyond our initial fears, which were already leaning toward what we thought would be the worst," Maurizio Giuliano, a spokesman for the U.N.'s Office for the Coordination of Humanitarian Affairs, said Friday. "The number of those affected and those in need of assistance from us are bound to keep rising. The floods seem determined to outrun our response."

The U.N. also said Friday that it is increasingly concerned about flood-driven malnutrition among children.

"The flooding has surrounded millions of children with contaminated water," said Karen Allen, deputy representative of the United Nations Children's Fund (UNICEF) in Pakistan. "Most have nothing else to drink. We fear the deadly synergy of waterborne diseases, including diarrhea, dehydration and malnutrition."

A hospital in Sindh is overrun with people suffering from waterborne illness; two children share each bed and more are on the floor. A doctor at the hospital said there are "not enough resources because of huge population ... coming to this hospital."

Remat Chacher, a farmer in Sindh, escaped the flood waters with his wife and two children earlier this month. But then his 3-month-old daughter Benazir got sick. "She started to get fever and couldn't keep anything down ... lots of belly pain," said Ulla, the infant's mom.

A few days later, the same symptoms struck the Chachers' son, 2-year-old Wazira. Both children died on the way to the hospital, with Wazira weighing just 8 pounds and Benazir weighing 2 pounds.

At least 200 health facilities across the country have been damaged or destroyed, according to the World Health Organization.

Flood waters have started to recede across Pakistan, but in the Indus River delta, the potential for more flooding remained high.

It is unclear when displaced Pakistanis will be able to return to their homes. But many will have no house to return to. About 1.2 million homes have been destroyed from the flooding.