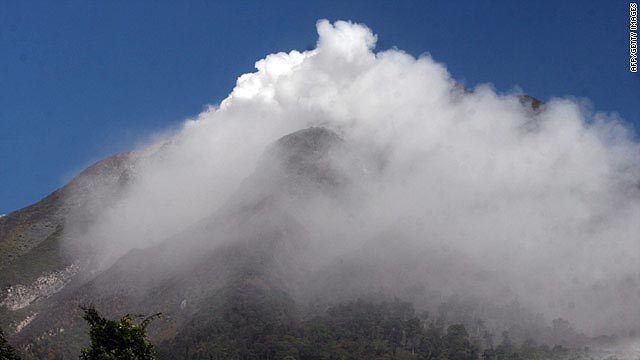 Jakarta, Indonesia (CNN) -- Two people have died and more than 30,000 were displaced when a long-dormant volcano in Indonesia erupted again on Monday, officials said.

Mount Sinabung, which had been dormant for more than 400 years before it erupted early Sunday, erupted again for more than six hours Monday, shooting smoke more than three miles into the air. The rumbling sent tremors into nearby villages, where officials said some residents panicked.

"It has now stopped. We have enough food and water here, but we need more gas masks," said Johnson Tarigan, a spokesman for Karo district.

Some small domestic flights have been deferred because of the volcanic ash, but larger planes have not been affected, since they can simply fly over the ashes, said Bambang Ervan of Indonesia's Ministry of Transportation.

Two deaths were reported Monday after the second eruption.

"The two people died because of heart attack and respiratory complication," said Priyadi Kardono of the National Disaster Coordination Agency. "We have sent food and gas masks for the rest of the displaced people."

After the eruption, glowing volcanic materials spewed out of the long-dormant mountain and could be seen as far as 10 km away (10.2 miles), the official Antara news agency reported.

Officials are concerned that if the eruption continues, the smoke -- up to 2,000 meters (6,561 feet) high -- could disrupt aviation. But the nearby Polonia International Airport was still operating normally Monday.

On Saturday, the Center for Volcanology and Geological Disaster Mitigation issued a warning and ordered evacuation of a six km (3.7 miles) radius around the volcano. Investigators are studying the volcano, which officials had believed was inactive before Sunday's eruption.