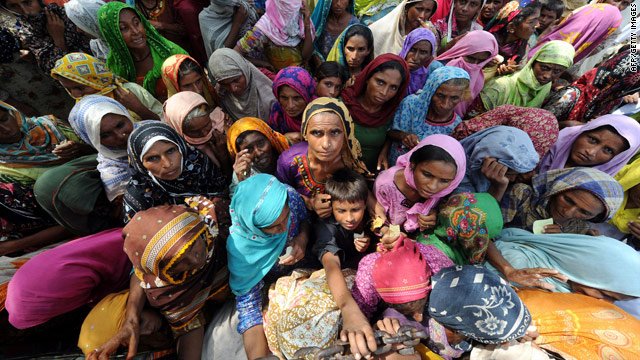 Internally displaced Pakistani women wait for relief goods in Larkana on September 3. Relief efforts in flood-ravaged Pakistan are being stretched by the 'unprecedented scale' of the disaster.
STORY HIGHLIGHTS

Pakistani disaster officials said Wednesday that recent floods have killed about 1,677 people and 17 million have been affected nationwide.

The United Nations, meanwhile, warned that a crisis is building in the eastern province of Balochistan, where nearly 2 million people are affected.

Mengeshe Kebede, the Office of the United Nations High Commissioner for Refugees' representative to Pakistan, said there is a "humanitarian tragedy" taking place in Balochistan, with imminent threats of water-borne diseases and food shortages.