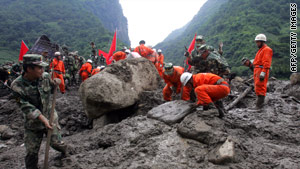 The mudslides occurred in Yunnan Province's Baoshan City on Wednesday, the report said.

Investigators believe the mudslide was caused by loose and rain-soaked dirt and rocks on a steep slope.