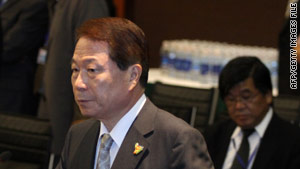 (CNN) -- The South Korean foreign minister offered to resign Saturday amid a brewing controversy over the hiring of his daughter, state media reported.

Yu Myung-hwan decided to step down because of allegations of nepotism, Yonhap news agency reported.

Yu is the longest-serving Cabinet minister under the current administration. He has served in the job since the start of the Lee's administration in February 2008, the news agency reported.

This resignation comes on the heels of the August resignations of South Korean prime minister-designate Kim Tae-ho and two other nominees to Cabinet positions.

Kim was accused of receiving tens of thousands of dollars in 2007 in illegal political funds from a businessman, the news agency said.

The two nominees had been under scrutiny for unethical and alleged illegal activities, according to Yonhap.