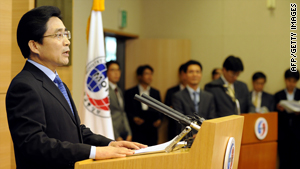 (CNN) -- South Korea on Wednesday announced sanctions against Iran -- including government scrutiny of most financial transactions involving the country -- as part of global efforts to quash Tehran's suspected nuclear program.

The Seoul branch of Iran's Bank Mellat has allegedly facilitated hundreds of millions of dollars in transactions for Iranian nuclear, missile and defense agencies, the Yonhap news agency said.

Korea also will expand a sanctions blacklist to limit the foreign-exchange transactions of more than 100 people and Iranian entities; step up inspections of suspicious cargo to and from Iran; put those blacklisted on a travel ban; and limit investments in Iran's gas and oil refinery industries.

The blacklisted entities include Bank Mellat, the Islamic Revolutionary Guard Corps and the Islamic Republic of Iran Shipping Lines, according to Yonhap.

The United States, a key South Korean ally, has lobbied other nations to step up sanctions against Iran. The European Union, Canada and Japan are among those that have done so.

Iran is continuing its uranium enrichment activities in defiance of U.N. Security Council resolutions, according to a report released Monday by the International Atomic Energy Agency.

Iran has rebuffed international demands to halt its uranium enrichment program, saying it wants the nuclear fuel for peaceful uses. The IAEA is not convinced.

"Based on an overall analysis undertaken by the agency of all the information available to it, the agency remains concerned about the possible existence in Iran of past or current undisclosed nuclear-related activities involving military-related organizations, including activities related to the development of a nuclear payload for a missile," the IAEA report said.

Last month, the United States extended sanctions against Iran, saying it was targeting a number of Iranian businesses and groups accused of helping organizations such as Hezbollah, Hamas and the Taliban.

In June, the United Nations imposed some of its toughest sanctions yet of Iran. The new sanctions include cargo inspections, new controls on Iranian banks, restrictions on the Islamic Revolutionary Guard Corps, a new U.N. panel of experts to help monitor and enforce sanctions, and asset freezes on 40 entities and individuals.