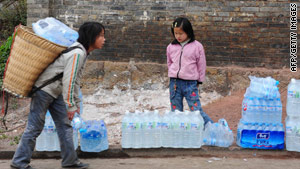 Beijing, China (CNN) -- China can't dam or divert water quickly enough to keep up with its thirsty population, and the shortage has reached crisis levels in Beijing and other areas.

In northern China this month, farm fields have developed cracks up to 10 meters (32.8 feet) deep. Farmers in Chifeng city have had to delay harvests to avoid injury, the state-run Xinhua news agency reported. According to the Chifeng's hydrological bureau, 62 percent of the city's 51 reservoirs have run dry, Xinhua said. More than 250,000 people are short on drinking water.

In southwest China's Guizhou province in August, a drought affected more than 600,000 people and nearly 250,000 heads of livestock, according to Xihua. Parched soil in rice fields was covered with cracks.

Beijing's water shortage will soon reach 200 million to 300 million cubic meters, even as the city waits for a new diversion of water from southern China, according to state-run media.

Hundreds of other Chinese cities face varying levels of water shortages and deteriorating water quality, even as industries continue to pollute water.

Such deprivation by China is hard to document. Those other countries also lack the money or political ability to build dams and reservoirs as quickly as China has. Chinese officials routinely build infrastructure and relocate residents despite opposition.

Chinese water use has surged with a growing number of factories and power plants, as well as with personal consumption. Swelling numbers of Chinese can now afford piped water, private bathrooms, washing machines, homes with gardens, cars that need washing, and more food, which needs growing. Buying power also has led to a growing number of golf courses, and ski resorts that use man-made snow.

Across the country, China has spent tens of billions of dollars to dam rivers, build reservoirs and dig deeper wells. Beijing also has tapped underground water to meet its needs, with the water level in the plains falling to 11 meters to 24 meters below sea level over the past decade, according to Xinhua.

Such demand for water is unsustainable. The World Bank warns that dwindling water supplies will pit rich against poor, and rural against urban, in China. Without dramatic changes in water use, tens of millions of Chinese will turn into environmental refugees over the next decade, the World Bank says.

More than 40 percent of China's population is concentrated in its relatively dry north.

China this year overtook Japan as the world's second-largest economy. China has been able import myriad commodities to drive such growth, but there is no easy fix to its water problems.