On the trail of human trafficking: stone breaking industry in Nepal 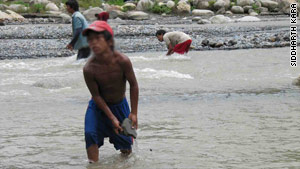 Kathmandu, Nepal -- During my final week in Nepal, I explored a disturbing mix of labor abuses.

The first sector involved forced labor in the stone breaking industry. To reach the villages, I had to hike for several hours through steep and steamy foothills about a two-hour drive from Kathmandu.

Along a shallow riverbed, I explored seven different villages caught in forced labor, debt bondage, and child labor for stone breaking. The broken stones are primarily used for construction in Kathmandu.

The first step is to gather stones from the river. Countless large stones have washed down from the Himalayas during the monsoon floods. Old and young alike stand waist deep in the fast-flowing water and reach down to take hold of the stones, which they then carry to the shore.

At the shore, the bigger stones are broken into smaller stones by a large hammer. Finally, these smaller stones are taken up to the village then placed in a small rubber circle where they are bashed down with a small hammer to the desired size.

One full family involved in this process can break about 200 kilograms of stones per day, which is enough to earn them around $0.70 income.

We borrowed 20,000 rupees from the contractor for this surgery and now we have been paying this debt for four years.
--Kumar

A contractor comes down the nearest dirt road high above the riverbed with a tractor every week or two to collect the broken stones and pay the wages. He also delivers food.

This is where the forced labor sets in. The contractor forbids the villagers from leaving the villages or trying to take any other work, and his main threat to ensure compliance is withholding food supplies. He also has guards who make sure the villagers stay in their huts breaking stones.

Because the villagers are caught in forced labor for pathetic wages, they constantly enter into debt bondage with the contractor when they borrow money for basic survival.

One of the worse cases involved "Kumar." He had to go to a hospital to remove a cancerous tumor in his throat. He no longer speaks, but his wife told me, "We borrowed twenty-thousand rupees from the contractor for this surgery, and now we have been paying this debt for four years. He pays us nothing...we only receive food."

I also investigated several carpet factories in Kathmandu, in which all the carpets produced are exported to the EU and the US.

Some of the factories had several looms with scores of young adults weaving carpets. Four or five people might work on the largest carpets (ten square meters) for up to two months to finish.

Other looms were smaller and filled with children who are typically trafficked into Kathmandu from rural areas in Nepal, and even India. In these looms, the children are kept locked inside, they work eighteen or more hours a day, they might be paid a few dollars per month, and they are punished harshly if they misbehave, fall asleep, or make mistakes.

This scene was a near carbon copy of the carpet looms we explored in India a few weeks ago. The children I saw in Kathmandu looked tired, pale, weak, and frightened. The spark of childhood innocence was nowhere to be found.

Weeks of encounters with extreme destitution and exploitation across South Asia have taken their toll. There are no quick fixes to human trafficking, forced labor, debt bondage, and child labor.

Though I have documented these offences on all six continents, nothing I have seen anywhere approaches the scale of these crimes as I have seen in South Asia.

No doubt, we must find a better answer, and it needs to start here...soon.