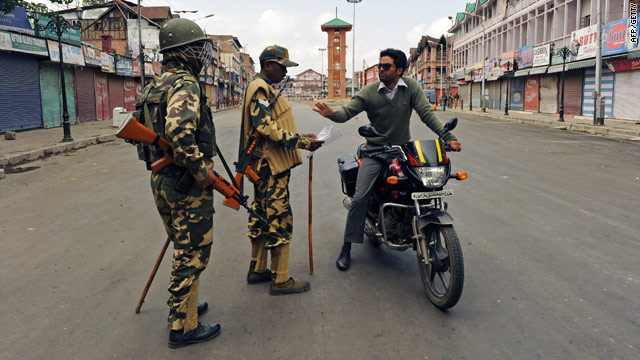 Srinagar, India (CNN) -- Four people were killed and eight others wounded Wednesday when police fired on demonstrators in the town of Mendhar in India's Jammu and Kashmir state, a local official said.

The protests, triggered by allegations of the desecration of the Quran in the United States, quickly turned into the violent anti-India demonstrations that have taken place all summer in India's restive Kashmir region.

Monday was the bloodiest day yet: 18 people were killed and 80 others wounded in demonstrations against India and the United States.

Protesters torched two Christian missionary schools and several government buildings, after which the Indian government imposed a round-the-clock curfew, forcing a complete lock-down on the region and creating shortages in essential items including baby food, milk and produce.

All flights in and out of Srinagar, the summer capital of Jammu and Kashmir state, were suspended for the first time in a decade. Indian police were out in force on the streets of Srinagar, keeping residents hunkered down in their homes.

But demonstrations in support of Kashmiri independence have continued and police have met angry crowds with the force of batons and the sting of teargas.

So far this summer, 89 people have died in anti-India demonstrations in Kashmir, the predominantly Muslim part of Jammu and Kashmir state where many favor severing ties with New Delhi.

Divisional Commissioner Pawan Kotwal told CNN that protesters tried to burn down another school run by Christian missionaries in Mendhar, a Muslim town southwest of Srinagar that is in the predominantly Hindu area of the state.

He said an indefinite curfew has also been imposed in Mendhar.