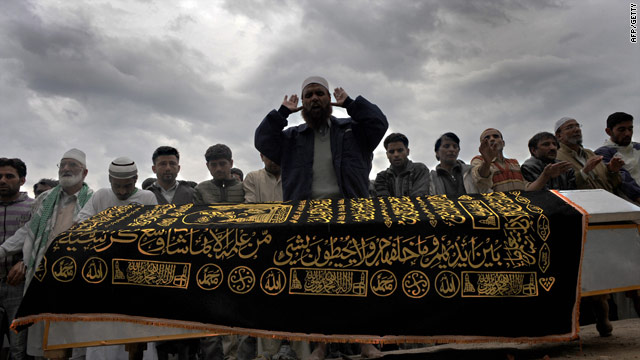 Kashmiri Muslims in Srinagar offer prayers on Saturday for a protester killed during riots on September 14.
STORY HIGHLIGHTS

Violence triggered by the recovery of a young man's body killed three people in the town of Anantnag, police said.

Six others were wounded in the deadly clashes that erupted after the body of Maroof Ahmad Nath, 25, was pulled out of the Jhelum River. He had jumped into the water after being chased by Indian security forces earlier this week.

Angered by the grisly discovery, thousands of Kashmiris took to the streets demanding independence from India. They hurled stones at security forces and attempted an attack on a house belonging to a pro-India politician, police said.

In the town of Palhallan, another person was killed and three others were wounded in similar clashes, police said. One of the wounded later died of their injuries, police said.

The mainly Muslim Kashmir Valley is part of India's Jammu and Kashmir state but many residents favor independence. It is a dispute rooted in the 1947 partitioning of India when Kashmir was divided into two -- a part going to Pakistan and a bigger chunk remaining in India at the the ruling king's request.

In 1989, Kashmiri separatists took up arms but the violence had waned in recent years, until this summer.

The government has imposed strict curfews and deployed extra forces on the streets to keep the calm, senior police officer Shafaqat Ahmad said. Residents were warned to stay indoors as the funerals commenced for those who were killed.

In Srinagar, the summer capital of Jammu and Kashmir, crowds turned out for the funeral of a youth who died Saturday from injuries sustained two days earlier. They chanted: "Freedom."