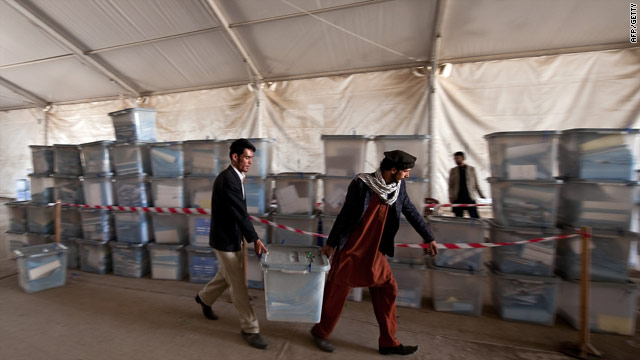 Kabul, Afghanistan (CNN) -- Congratulatory messages have been pouring in to Afghanistan after Saturday's parliamentary elections, with dignitaries commending voters' bravery for defying Taliban rocket and bomb attacks to cast their ballots.

But a question arises after a cursory examination of polling numbers: What happened to 2.2 million eligible voters?

Saturday night, the Independent Election Commission (IEC) announced it recorded a 40 percent turnout, with 3.6 million votes cast out of a total of 9.2 million eligible voters.

But in the widely-criticized presidential elections of August 2009, the IEC reported 11.4 million eligible voters. And the commission's website reports a total of 16.7 million voters have been registered in Afghanistan since 2003.

Asked about the discrepancies, an IEC official said the registered voter population was reduced after the commission was forced to close nearly 20 percent of the country's polling centers on Saturday due to Taliban violence.

"Polling centers were closed because of security reasons," said Qani, an official at the foreign relations department of the IEC who, per Afghan tradition, uses only one name. "The population of those areas were deducted from the total population of registered voters which was 11.4 million."

Some election observers, however, are calling for clarity.

"The different numbers they are presenting are not consistent," said Nader Naderi, the chairman of Free and Fair Election Foundation of Afghanistan, a Kabul-based election watchdog organization. "We will convene a press conference tomorrow and ask for a clear explanation from the IEC."

"We believe and hope that they learned a lesson that massive fraud will be detected and is unacceptable," Staffan de Mistura, the U.N. special representative for Afghanistan, told CNN.

At the polls on Saturday, many voters and candidates expressed doubt and skepticism about the election, which came with a price tag of approximately $150 million.

"I saw fraud many places," said Jamil Karzai, a parliament member who was running for re-election.

"It is not a real election," said Abdul Qader Zazai Watandost, who at the age of 30 was making his second attempt at being elected to parliament. He accused IEC of actively supporting candidates at the polls.

"There were large swaths of the population who were unable to participate, whether because they didn't want to or because they were prevented by violence or discouraged by fraud," said Candace Rondeaux, senior analyst with the International Crisis Group.

Despite the deployment of hundreds of thousands of police and soldiers across the country on Saturday, Afghan officials said Taliban-related violence claimed the lives of at least 12 civilians along with at least three Afghan police officers and an Afghan soldier.