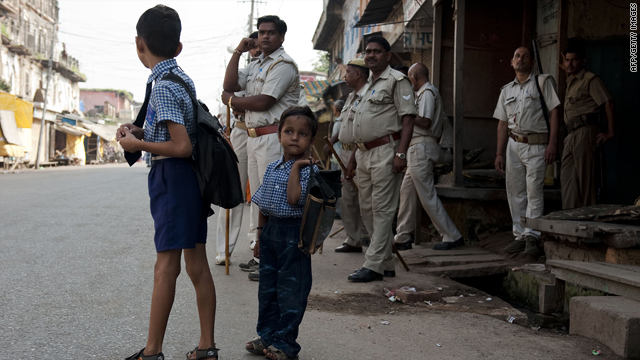 Security personnel patrol the streets of Ayodhya Thursday ahead of the verdict on the Babri Masjid site.
STORY HIGHLIGHTS
RELATED TOPICS

Thursday's order postpones a judgment that will decide ownership of long-disputed land in the northern Indian town of Ayodhya.

Supreme court lawyer Mukul Rohatgi told reporters that the hearing on the petition would resume Tuesday. Until then, the lower court dealing with the decades-old case has been directed to put its decision on hold, he said.

India stepped up security ahead of the anticipated decision and on Wednesday, temporarily banned mass text messages over fears that the ruling might spark sectarian passions.

The northern Indian town has been a religious flashpoint for more than 400 years. Hindus believe that Lord Rama, one of the religion's most revered deities, was born there.

In 1859, British colonial administrators annexed the site because of growing religious disputes and created separate Muslim and Hindu places of worship there. Two years after independence, in 1949, the gates were locked after Muslims claimed Hindus had placed deities of Rama in their area.

Hindu groups have pushed to build a temple in Ayodhya, to replace a Muslim mosque razed by a Hindu extremists 1992. The destruction of the 16th-century Babri mosque sparked widespread riots in which more than 2,000 people died nationwide.

A court battle over who has rights to build on the site has dragged on for years.

This month, Hindus and Muslims were urged to pray for peace after the judgment date was announced, and some Ayodhya residents fled to avoid any violence.

"It would be inappropriate to reach any hasty conclusion that one side has 'won' or that the other side has 'lost,' " he said. "Besides, it would be reasonable to assume that one or both sides would immediately apply to the special bench of the high court for leave to appeal to the supreme court on the issues that either side may think have been decided against it."

Rohatgi said the supreme court has sent notices to both sides in the lawsuit in an attempt to find a compromise over the explosive issue.