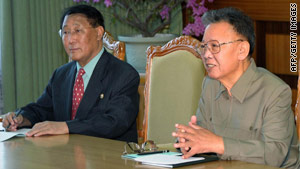 (CNN) -- The architect of North Korea's nuclear arms program has been promoted to vice premier of the country's Cabinet, state-run media said on Thursday.

Kang's promotion comes ahead of a rare meeting of the ruling Korean Workers' Party next week, which might set the stage for the handover of power from Kim Jong Il to his youngest son.

Kim has been North Korea's lead representative in the six-nation talks over the North's nuclear arms program.

KCNA also said Thursday that Ri Yong Ho was appointed vice minister of foreign affairs. Ri has been another key negotiator in the six-nation nuclear talks.

Speculation is rampant that North Korea's political leaders are working to set the stage for a possible handover of power from Kim Jong Il to his son Kim Jong Un.

The North has said that its ruling party will meet on September 28, after last convening its delegates more than four decades ago.

Analysts think succession plans have accelerated in North Korea because the elder Kim, 68, is in poor health after suffering a stroke.

Under the elder Kim's leadership, the North has poured money into its military, nuclear and missile programs while its people have gone hungry.