Obama, Wen huddle in a side meeting at U.N. 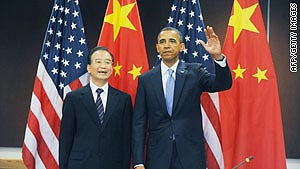 United Nations (CNN) -- President Barack Obama urged Chinese Premier Wen Jiabao to speed up the revaluation of his nation's currency, telling him in a two-hour meeting Thursday that the slow pace of reforms was affecting both the global and U.S. economies, a top U.S. aide said.

The talks on the sidelines of this week's U.N. General Assembly opening also covered security issues including Iran, Sudan and the dispute between China and Japan -- a major U.S. ally -- regarding the South China Seas, said Jeff Bader, Obama's special assistant and senior director for Asian affairs.

Most of the focus was on economic issues, Bader said, because Wen is responsible for managing the Chinese economy, the world's second-largest behind the United States.

On Wednesday night, Wen said in a speech to the business community in New York that China will continue reforming and opening its markets under a policy it started in 1978 by officially ending decades of isolation.

However, demands by U.S. lawmakers that China revalue its currency by more than 20 percent would bankrupt Chinese companies and lead to "major unrest" in his country, the premier said.

Also Wednesday, the U.S. House of Representatives considered a bill to allow the United States to retaliate against China's handling of its currency. Some trade leaders say Beijing has suppressed the yuan's value, giving its exporters an unfair advantage in world trade.

In Thursday's talks, Obama noted that "there had not been much movement since" China said in June that it would implement a more liberal currency policy, Bader said. The president told Wen that the Chinese inaction "had consequences for the global economy and the U.S. economy," according to Bader.

Bader declined to characterize Wen's response to Obama, saying only that Wen "did reiterate Chinese intention to continue with reform to their exchange system."

In remarks to reporters, Obama and Wen emphasized cooperation between their governments and the need for frank discussions on their differences.

"We have worked together on a whole range of issues," Obama said, citing the reaction to the financial crisis and global recession of recent years.

Obama said the countries also have cooperated extensively on issues of nuclear nonproliferation and have engaged in "very frank discussions and cooperated on issues of climate change."

"Obviously, we continue to have more work to do," Obama said. "On the economic front, although the world economy is now growing again, I think it's going to be very important for us to have frank discussions and continue to do more work cooperatively in order to achieve the type of balance and sustained economic growth that is so important and that we both signed up for in the context of the G-20 framework."

Wen noted that "common interests far outweigh our differences" and that despite "disagreements of one kind or another between our two countries, the differences can be resolved."

"Our two countries can have cooperation on a series of major international issues and regional hot-spot issues," Wen said. "We have cooperation on tackling the financial crisis and meeting the climate challenge. China and the United States have also embraced an even closer and bigger relationship in the fields of public finance, financial industry and economic cooperation and trade."

In his speech Wednesday, Wen initially struck an affable tone, beginning his remarks with a rare unscripted detour from his prepared statements. Wen referred to historical cooperation between Chinese and Americans, including references to five Chinese citizens who fought in the U.S. Civil War.

China and the United States have had a positive relationship despite "minor fluctuations," he said, apparently referring to differences over the U.S. trade deficit and currency policy.

However, the premier also accused the United States of policies that impede fair trade.