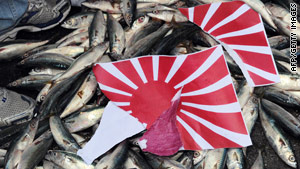 "I have no intention of accepting [the demand] at all," Japanese Prime Minister Naoto Kan said, according to Japan's official Kyodo news agency.

Kan also said both countries should take a calm approach to the issue.

''It is important for both sides to act with a broader point of view,'' he said, according to Kyodo.

The foreign affairs ministry went on to assert Japanese jurisdiction over the islands where the captain was detained and declared that the dispute was handled in accordance with Japanese law.

Zhan Qixiong was detained earlier this month after his trawler collided with Japanese vessels near disputed islands in the East China Sea. He was freed on Friday.

Despite the call for an apology, China's Foreign Ministry said in a statement that the two sides should resolve the problems through dialogue and consultation, according to Chinese state media.

He arrived home safely on Saturday, according to Xinhua.

"We decided to suspend the charges in consideration of the Japan-China relationship," the Japanese prosecutor in the case said.

The arrest has increased tensions between the two countries, with Beijing accusing Japan of "unlawful and invalid" arrest of the captain and his crew of 14, according to Xinhua.

China considers the Diaoyu Islands and most of the South China Sea its property, disputing neighboring countries' claims.

In Japan, the islands are known as the Senkaku. The clash over territorial waters and islands -- and the natural resources that go with them -- is a flash point in the Asia-Pacific region.