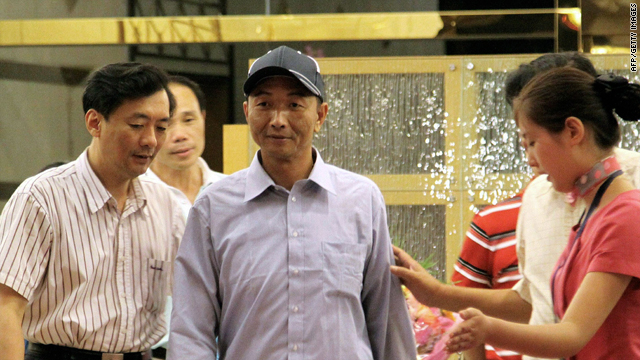 Tokyo, Japan (CNN) -- Japan on Monday said it would demand compensation for damage done to coast guard ships by a Chinese fishing captain, lobbing a diplomatic ball back at China.

The face-off between Beijing and Tokyo stems from Japan's arrest of the captain in early September off the disputed Diaoyu Islands, in the East China Sea.

"Naturally speaking, we are to ask for the repair cost for the damage" to a coast guard boat, Chief Cabinet Secretary Yoshito Sengoku said at regular news conference Monday. "Now the ball is on the side of China in terms of firming up the mutually beneficial and strategic relationship."

Tokyo has already rejected Beijing's demand for an apology and compensation over the arrest.

The release of the captain was widely seen as a diplomatic retreat by Tokyo, in response to Beijing's ire.

China said Japan had arrested him illegally, and Beijing increasingly stepped up pressure to secure his release.

Beijing made diplomatic threats, cut off ministerial-level talks, and cancelled visits by officials and tourists between the two countries.

Critics in Japan have blasted the government of Prime Minister Naoto Kan, demanding a firm stance against Beijing.

China's increasing economic and military might has fueled concerns in the Asia-Pacific region and beyond. China this year overtook Japan as the world's second-largest economy, after the United States. Japan's economy has stagnated for two decades, and the country has seen a revolving-door succession of weak prime ministers in recent years.

Beijing has meanwhile extended its reach around the globe, including investing heavily in Africa and Latin America. China is hungry for natural resources, including those in the South China Sea. Beijing claims the Diaoyu Islands and most of the South China Sea, disputing neighboring countries' claims. In Japan, the islands are known as the Senkaku.

The clash over territorial waters and islands -- and the natural resources that go with them -- is a flash point in the Asia-Pacific region.