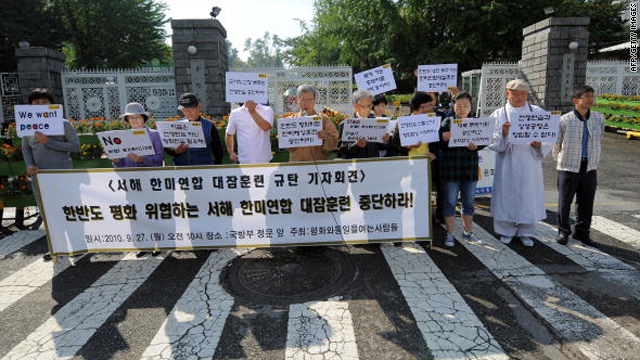 Anti-war activists hold a rally against a joint anti-submarine exercise, outside the Defence Ministry in Seoul on Monday.
STORY HIGHLIGHTS
RELATED TOPICS

"The warmongers blustered that they would conduct intensive training of the strategy, technique and procedures for countering someone's submarine infiltration, openly disclosing that the joint naval military exercises are targeted against the DPRK," said the state-run Korean Central News Agency. North Korea is officially called the Democratic People's Republic of Korea.

Seoul and Washington postponed the exercises earlier this month because of a tropical storm.

The drills, which are to run through Friday, are "designed to send a clear message of deterrence to North Korea," U.S. Forces Korea said.

U.S. officials have said the exercises off the western coast of the Korean peninsula are in response to North Korea's sinking of a South Korean warship in March.

In May, a report from South Korea blamed the North for sinking the Cheonan warship with a torpedo, killing 46 sailors.

North Korea denies sinking the ship and says South Korea and the United States are using it as a pretext to conduct the war games.