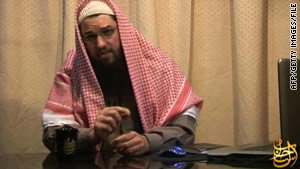 (CNN) -- The governments of Afghanistan and Pakistan serve only the interests of the United States and its allies and not of the local Muslim populations, an American-born al Qaeda spokesman said in a new video purportedly from the organization.

The spokesman, Adam Gadahn, expressed condolences on behalf of al Qaeda for the loss of life in the devastating floods that hit Pakistan recently. Millions of Muslims spent Ramadan without a home because of the floods and the war, he said.

"Some of them are refugees because of the devastating floods resulting from the extraordinarily heavy monsoon rains, while others are refugees from the military operations launched by the crusader army and its helpers and proxies throughout the region," Gadahn said.

CNN could not independently verify the authenticity of the 7-minute video, posted on websites known to carry such messages in the past. In it, Gadahn speaks in English; the video features Arabic subtitles.

Citizens of Afghanistan and Pakistan must change the way their countries are governed, he said.

Aid was slow to arrive to the areas ravaged by the flooding, Gadahn said. Yet, the governments in Islamabad and Kabul move quickly to drop in troops to help the war on terror, he said.

The governments are so corrupt that aid money for the disaster areas will likely end up "in the pockets of the generals and politicians," he said.

"The fact is, while the generals, politicians and puppets try to hide their war crimes from public view, they have done little to hide their indifference to the suffering of the flood- and war-ravaged people they claim to represent and serve," Gadahn said.