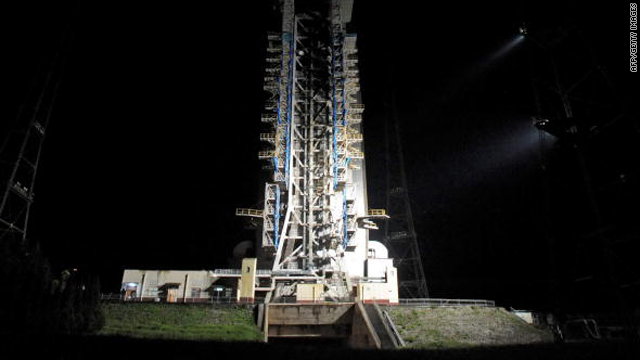 The rocket carrying the unmanned probe blasted off at 7 p.m. from a launching tower at the Xichang Satellite Launch Center in southwest China's Sichuan Province, state-run media said.

"According to scientific calculations, only three days [from Friday to Sunday] are suitable in the whole year for launching the lunar probe," said Qian Weiping, chief designer of the mission's tracking and control system, according to China Daily.

More than 2,000 residents within 2.5 kilometers (1.6 miles) of the launch pad were evacuated as a precaution ahead of the launch.

Chang'e-2 is to orbit within 15 kilometers (9.3 miles) of the moon. The probe will test key landing technology for Chang'e-3, and provide high-resolution photographs of the landing area, China Daily said. Chang'e-2 is expected to reach lunar orbit within five days.

China launched its first lunar probe in 2007. Chang'e-1 hit the moon in a controlled crash in March 2009 after a 16-month mission.

In the third phase of China's lunar exploration program, Chang'e-3 is to land on the moon in 2013, to collect rock samples and bring them to Earth in 2017.

The series of Chang'e probes is named after China's mythical Moon Goddess.

The country's space program has made significant steps this decade.

In 2003, China became the third nation, after the United States and Russia, to put a person in orbit. That year, Yang Liwei was celebrated as a national hero when he became the first Chinese in space.