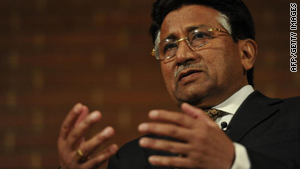 London, England (CNN) -- Former Pakistani President Pervez Musharraf, once one of the United States' strongest allies in the fight against terrorism, launches a new political party Friday as he ramps up for what looks like another run at the top job.

Musharraf, 67, will launch the "All Pakistan Muslim League" Monday morning in London.

Musharraf says he sees political hope in the 60 percent of the Pakistani electorate that doesn't vote, who need "awakening."

"I feel the majority is the middle class, educated, youth, women, minorities. So it is this 60 percent that needs to be awakened to vote," he told an investment forum in Hong Kong last month.

"I launched a Facebook [page] about six or seven months back, and to my surprise I have a fan base now of 295,000 people," he added, referring to one way of reaching out to potential voters.

Musharraf resigned in 2008 as Pakistan's ruling coalition began taking steps to impeach him. He was succeeded by Asif Zardari, the widow of assassinated former Pakistani Prime Minister Benazir Bhutto.

In April, the United Nations released a report that said Musharraf's government had failed to protect Bhutto before her 2007 assassination. Musharraf has rejected such accusations, saying that Bhutto had police protection and took unnecessary risks.

Bhutto's assassination turned public opinion strongly against him in 2008 and led to his resignation and self-exile in London.

He has dismissed the threat of charges against him in Pakistan, tied to his years of military rule.

"There is no case pending against me in the courts of Pakistan," said the former army general, who swept into power in a bloodless coup in 1999.

"There are elements opposed to me, political elements, and they are the ones who engineer these cases," he said at the Hong Kong forum. "I'm very confident nothing can happen legally against me."

The timing of his return to Pakistan depends on the environment there, but he will be there for the next election, he said.

He had previously told CNN that security concerns were shaping his decision on when to return.

As president, Musharraf was the United States' key ally in a region racked by terrorism. The United States sent millions of dollars in aid to help Pakistan battle the Taliban and al Qaeda.

In July, military documents divulged by WikiLeaks indicated that Pakistan's spy service might have been helping militants in Afghanistan, an accusation that Pakistani officials have rejected.