After hail of criticism, Commonwealth Games opening in India 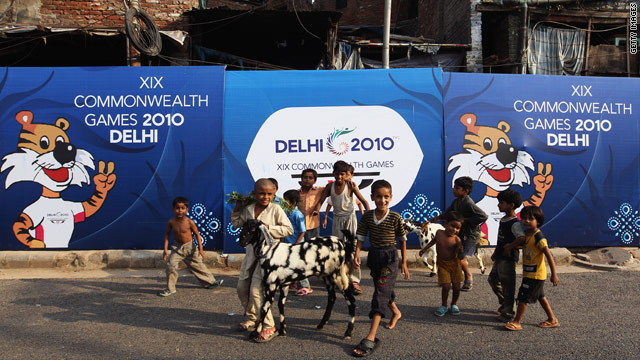 It's the first time India has hosted the international sporting event between countries of the former British Empire.

Britain's Prince Charles, representing his mother, Queen Elizabeth, arrived in the Indian capital Saturday. He, along with Indian President Pratibha Devisingh Patil, will officially declare the games open at a ceremony at Jawarharlal Nehru Stadium.

Excitement filled the air in New Delhi after days of fears that India simply would not be ready in time. Athletes had expressed alarm over the poor condition of their village. Others charged shoddy construction and slammed the government for corruption.

The games afforded India an opportunity to promote a shiny image as an emerging power. The government spent billions on a new international airport, additional metro lines and fresh landscaping along dingy Delhi roads.

Still, India remains a country with millions of poor people, who this week felt brushed aside as the new India tried to put its best face forward.

People like Shanti, a 65-year-old beggar, who said she was detained by police for sitting on the side of a street, where she always sits, hoping that passers-by will drop a few coins in her hands. Or Mala Mangla, who sells balloons on the streets. She said police have told her to disappear for at least a month.

India, they said, was trying to hide them from foreign visitors. They said beggars have been warned to stay off the streets. So have vendors and children who are commonly seen going from car to car begging. And shanties have been torn down.

"There has been a very strong movement by the government .. to get rid of the filth and to portray the beautified and shining India," said Maushmi Basu, a migrant worker activist.

Police and government officials contacted by CNN did not return calls.

The Indian government maintains that it respects the rights of the poor. But there are also laws against begging and putting up structures without proper permits and begging is illegal in New Delhi.

The games have been a tough act for a nation that has never hosted such a large international event.

Months earlier, Parliament was forced to deal with accusations of corruption in the planning of the games.

Two weeks ago, gunmen fired on a tourist bus in New Delhi and injured two Taiwanese tourists. A car blaze turned out to be a crudely manufactured bomb. And a militant group warned that it planned to target the games.

If all that weren't enough, two days before athletes were scheduled to begin arriving, complaints rang out across the globe about their shoddy living quarters.

"You know, construction dust is still there, filth, excrement, it really is disgusting in parts and it really requires a professional deep clean throughout the entire complex," said Michael Hooper, chief executive officer of the Commonwealth Games Federation.

As if to amplify Hooper's complaint, a pedestrian bridge leading to Nehru stadium collapsed that same day. India's image was slipping faster than a rocket.

Indian officials went to work on a massive clean-up effort. In the end, athletes from 71 countries showed up and have settled in.

India still wants to make a lasting impression on its visitors.

Delhi Chief Minister Sheila Dixit said she hoped the Commonwealth Games would leave a legacy that will ultimately make life more comfortable for the residents of India's sprawling capital -- rich and poor.

Organizers certainly hope that with opening ceremonies Sunday, the glow will wipe out the gloom.