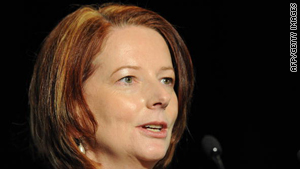 (CNN) -- Australia's prime minister traveled to Afghanistan and met with the country's president on her first international trip since taking office.

In discussions with Afghan President Hamid Karzai and government ministers, Gillard "underscored Australia's intention to continue working with the Afghan government to help meet its objectives to improve security, governance and development across the country," the statement said.

Gillard also discussed plans to work with officials to transition to Afghan-led security with Gen. David Petraeus, the commander of NATO troops in Afghanistan, the statement said.

The Afghanistan visit was the first of several stops on Gillard's first overseas trip since becoming prime minister, the statement said.

She is also traveling to Zurich, Switzerland, to meet with FIFA officials about Australia's bid for the World Cup in 2018 and 2022. FIFA is the international football governing body.

Later in the week, she will travel to Brussels, Belgium, for a conference discussing trade and security with leaders from Europe and Asia.