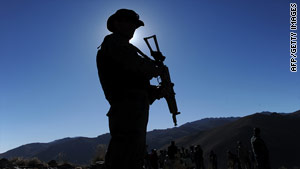 Among the companies whose operations are being dissolved are Xe (formerly known as Blackwater), NCL, FHI, White Eagles and other small companies, spokesman Waheed Omer said. Both international and domestic companies were affected.

Weapons and ammunition belonging to these companies have been seized, he said.

NCL, however, denied that the company was among those banned.

Zmary Bashari, spokesman for the Afghan Interior Ministery, agreed that NCL was not banned but said the company had to surrender some of its weapons. CNN has been unable to reach Omer for further clarification.

Xe has several operations in Afghanistan, some of which will not be immediately affected by the decision. While Xe's transportation and highway security operations have stopped, it will continue to offer security for embassies.

"Until we have Afghan security forces up and running, private security companies will continue to operate and serve in training and protection of foreign embassies," Omer said.

Of the eight companies named during the press conference, some have already disbanded, while others are in the process of doing so, Omer said.

"In order to protect Afghan life and property, avoid corruption, security irregularities and the misuse of military weapons, ammunition and uniforms by the private security companies which have caused tragic incidents, and after the required assessment, I approve shutting down all private security companies within four months, including both domestic and foreign," Karzai's decree said.

CNN's Mati Matiullah and Samson Desta contributed to this report.